Apparently, Ringo Starr has a foundation that promotes non-violence.  Evidently, part of the agenda is promoting some unintelligible form of gun control.

While in London promoting his foundation’s symbol, a psychedelic “knotted gun,” he talked about the death of his Beatles bandmate John Lennon and discussed his vision for tougher gun laws.

“It should be that if you’re caught with a gun or before you use it that it should be a higher sentence than what they get now,” the 71-year-old told the AFP.

“I can’t stand up and dictate to the world: ‘it’s over — no more guns’. I can just do what I do, and there’s another side to the story which is peace and love.”

Forgive me for my ignorance, but I’m not sure if Ringo is referring to all gun owners or just those who commit violent crimes.

In referring to Lennon, who was gunned down on December 8, 1980, Ringo recalled the shock of hearing about his death.

“My stepchildren called saying ‘Something’s happened to John’. And you don’t think ‘He’s been killed’, so you say ‘Well, what’s happened?’,” Starr told the AFP.

“They called me back. They called and said ‘John’s been killed. He’s been shot and he’s dead.’ 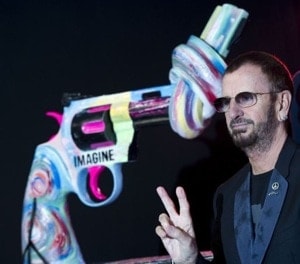 Starr flew from the Bahamas to New York to see if he could be of assistance following his friend’s death. He looked after Lennon’s son Sean for a while but later left feeling having another Beatle around was not helping the situation, according to the AFP.

“You don’t know what to do. Your emotions are so whacked out. You don’t believe it really, but you know it’s happening. It’s just such a mad moment,” he said.

“Yoko was there, of course, and she just asked us to look after Sean, who was a baby, and that’s all we did for a couple of hours.

“In the end it was so crazy that we got on another plane that night and went to Los Angeles.”

Pointing toward that knotted gun statue, he told the AFP: “It was a bad day. But it was a bad day because someone took one of these and shot John.”

The AFP correspondent should have said, “too bad John didn’t have one of those to protect himself.”