Dan Wesson’s guns all have a stellar reputation.  They’re built to tolerances that other manufacturers, short of custom 1911 builders, don’t even try to attempt.  They’re priced right, too, for what you get.  That doesn’t mean you won’t have to save up if you want a Specialist…

Following on the heels of their announcement of the return of the Dan Wesson 10mm Razorback, you’re either going to love or hate this 1911.  It doesn’t fit in John Browning’s mold.  It’s a tactical .45 ACP with special units’ needs in mind (as well as those who want the same hardware).  Yes, there is a rail. 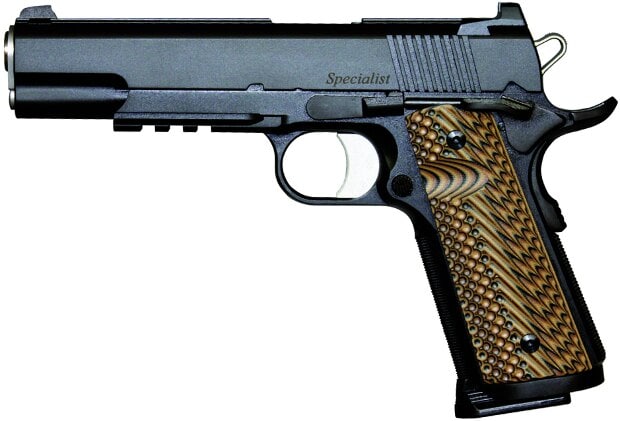 It also has a (detachable) magwell that almost completely swallows an extended 8-round magazine.  It has a barrel bushing and a full-length 5″ barrel, and only rear slide serrations.  The front- and backstraps have 25 LPI checkering, and the topstrap is serrated Clark-style to cut down on glare.  It also has custom high-speed-low-drag sights milled into the slide.

They’re low-profile jobs, with a white dot front sight and matte rear; the front sight has a green tritium lamp and the rear has a single amber tritium lamp for a figure-8 sight picture in the dark.  The rear sight is angled forward so that it can be used to charge the gun single-handedly.

The Specialist has an ambidextrous safety and “Hyena Brown” VZ G10 grips which are just tops.  They’re Operator II-style with thumb cutouts to speed magazine ejection; the magazine release is extended, as well.  Specifics:

This tactical 1911 will be offered right off the bat in 2012, and should be shipping if not in-stores in January.  It’ll be available with a matte stainless finish with an MSRP of $1560 or in matte black for $1870; real-world prices should be about $300 less.  All said and done, not your thing?  Then do, please, give the Razorback a once-over.