Like North Carolina, Wisconsin recently decided to revise its Castle Doctrine to expand the self-defense rights of law-abiding citizens.

Under the new law, prosecutors would presume that people using deadly force had acted reasonably against anyone unlawfully inside their residence, business or vehicle, regardless of whether that invader was armed.

Whereas, under the previous law, an individual had to prove he/she had ‘reasonable belief’ that the intruder was going to harm him/her before deadly force was justified.

Moreover, the new law protects any individual who lawfully uses force from being sued by the intruder or his/her family. 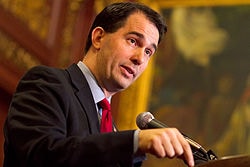 “By signing the castle doctrine into law, I am standing with those individuals who chose to protect their family and property,” Gov. Walker said in a statement.

He told the Milwaukee-Wisconsin Journal Sentinel, “I’m not going to have to sweat whether or not a prosecutor is going to come along and put the onus on me,” he said. “It’s going to send a profound message to would-be burglars and would-be intruders.”

However, not everyone was on board with the new law.  An affiliate organization within the State Bar of Wisconsin representing some 600 criminal defense lawyers, prosecutors, judges, and academics opposed AB 69 because “malevolent, reckless, or paranoid people who shoot trick-or-treaters or repairmen on their porch will be presumed to be acting in self-defense.”

Members of that group told the Journal Sentinel that they could not come up with a single case where a homeowner was charged with a crime for defending himself or herself against an intruder.

AB 69 took effect immediately.  And it does have several obvious limitations.  For example, the proposed immunity does not protect individuals who are dealing drugs or committing other such crimes from their homes.

Additionally, one is not justified in using force against police officers, firefighters, emergency medical technicians, etc.

Wisconsin, in the past year, has made several great strides in restoring the rights of law-abiding citizens.  One will recall that on Nov. 1, 2011, the Badger State became the 49th state to legalize concealed carry.