Alexander Arms, the company that brought us the 6.5mm Grendel (and the .50 Beowulf which doesn’t seem to be nearly as exciting) has been diligently tooling away on their AR uppers since getting their aforementioned caliber SAAMI-approved.  Now that 6.5 Grendel is public property, Bill Alexander will have to adapt to make his company stand out from the large and growing pack of premium AR builders.

One way to do that well is to produce rifles and uppers in innovative calibers.  This has always been one of Alexander Arms’ strengths.  The decision to make .17 HMR varminting and small-caliber target AR-15 uppers is bold, and also unique.  While .17 HMR has a strong following, and has giant backers not limited to Hornady, like Ruger, Marlin, Savage, CZ, Mossberg, Browning, Remington, and Winchester, the firearms chambered in the diminutive caliber are 99.99% bolt-action.

There are reasons for that; the parent case, the .22 WMR, being necked down to host .17 caliber bullets, is a rimfire cartridge, which and has a history of extraction issues, at least in automatic rifles.  Alexander Arms gets around this by re-designing Stoner’s upper, with an oversize extractor and firing pin, and modifying it with a straight blowback action.  It also uses something called a “recoil cassette” which just makes our eyebrows go scrunch. 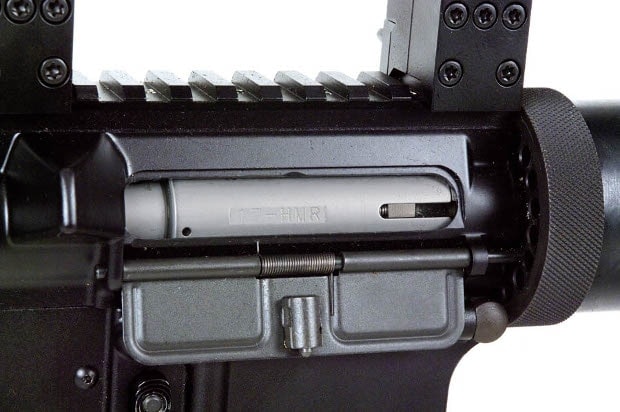 Suffice it to say, Alexander Arms believes they have cracked this nut and will be making 500 uppers after a short production run to produce some “beta” uppers which will be used for independent testing.  However, their prototype designs have been successes at both the Big 3 Event and the Blackwater (ACADEMI?) facility.  So that’s cool.

No word on pricing and availability is so far out we can’t give you a date, although Alexander Arms does want to have them on the market in 2012.  And while it’s not even time to speculate about pricing, existing Alexander Arms uppers sell for around $700-800.

The question is, for all you .17 HMR adopters, is having a semi-automatic platform to fire all this high-velocity, small-caliber varminting and target ammunition just what the shootist ordered, or are you content with your existing hardware?  If you’re not a bolt-action type, would being able to put your hands on a .17 HMR upper what it would take for you to get into this particular rimfire arena?  And how much would you pay for half of a varminting rifle?