Knowledge is power.  Unless one is a small business owner in the D.C. area, then knowledge, knowledge of the law, knowledge of one’s constitutional rights, knowledge of how to effectively cooperate with police, becomes a reason to justify a search warrant and a full-on police raid.

See, before police raided several popular Capitol Hemp stores in Washington, D.C. an affidavit was filed by an undercover officer seeking a judge’s approval to search the premises for evidence of drug paraphernalia distribution.

Well, on that affidavit was a list of evidence to justify the search and the subsequent raid.  One of those items was a DVD, 10 Rules for Dealing with Police; an instructional video that “shows how everyday people can sometimes face uncomfortable encounters with police, and every citizen is better off understanding their constitutional rights.”

Here is what the actual affidavit said with respect to the DVD:

4. While your Affiant was looking at the smoking devices U/C [redacted] observed a DVD that was for sale entitled 10 Rules for Dealing with Police.  The DVD gave the following listed topics that were covered as:

A. Deal with traffic stops, street stops and police at your door.
B. Know your rights and maintain your cool, and;
C. Avoid common police tricks and prevent humiliating searches.

The affidavit then went on to explain why the presence of this legal information must be viewed as indicative of criminal intent:

Your Affiant notes that while this DVD is informative for any citizen, when introduced into a store that promotes the use of a controlled substance this DVD becomes a tool for deceiving law enforcement to keep from being arrested. The typical citizen would not need to know detailed information as to US Supreme Court case law regarding search and seizure because they are not transporting illegal substances in fear of being caught.

Okay, let’s be honest, we’re talking about hemp stores that specialize in selling smoking implements such as water-pipes, bongs etc.  There’s no doubt that people go there to buy hemp products to use for smoking illegal substances, mainly marijuana.

But what does that matter?  Because, legally speaking, all the products that the store markets and sells are perfectly legal, as it cannot be proven that those items will be used to smoke dope or some other illicit drug.

And as far as any logical person can reason, regardless of where it is sold a DVD of legal information that seeks to help law-abiding citizens become more knowledgeable about the law does not in any way substantiate the claim that (a) the DVD itself is a “tool for deceiving law enforcement” or (b) the “typical citizen would not need to know detailed information as to US Supreme Court case law regarding search and seizure.”

To put this in the context of the gun community, one can imagine that a similar DVD sold at a gun shop could be used as evidence to suggest that an honest gun shop owner, a FFL, was selling firearms to criminals. 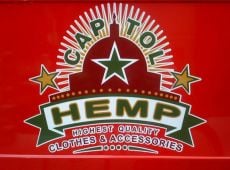 The rationale would look something like this, “the typical citizen would not need to know detailed information as to US Supreme Court case law regarding the Heller decision, which protects an individual’s right to possess a firearm for traditionally lawful purposes, such as self-defense within the home because the typical citizen doesn’t engage in unlawful activity that makes him/her a target of a deadly attack in his/her home.”

Or put another way, and as one blogger noted, “They could just as easily–and rather more honestly–have said that their position was that citizens “don’t need the right to keep and bear arms, unless they intend to wage civil war.”

In defense of their DVD and in response to the controversy the Hemp store raids, the filmmakers made an excellent point:

“When police use it in criminal procedure courses at the academy, that doesn’t make it a tool for arresting people any more than a hemp store customer might use it to trick cops. The Bill of Rights is not a trick or a loophole to protect criminals. It’s the highest law of the land. It’s also a template for good police work and good citizenship. That’s what Flex Your Rights is all about.”