The Orwellian spyglass miracle of modern communications that is Google Street View has kept Guns.com good and distracted while at work since 2008, and unless you’ve been living under a rock (and you may well need to just to get away from Google’s cameras), chances are you too have blown an entire afternoon scoping out your ex-spouse’s house for strange cars.

We’re joking of course. Guns.com finds the street view thing incredibly creepy, but if you’re that special kind of weirdo, boasting a psychological profile that fits both a voyeur and a spree killer, then Pool Worldwide has just the thing for you: Google Shoot View. 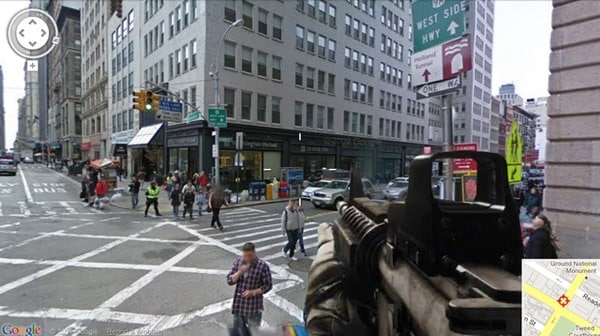 Pool Worldwide is a Dutch “creative agency” (which we guess is what we’re now calling ad firms in 2011) with a seemingly benign body of work to their credit. Their “Google Shoot View” project however makes use of Google Maps API by adding a first person shooter reminiscent M4A1 assault rifle and allowing users to stalk the streets of many actual cities, shooting up the crystal clear, Google powered captured images of people, cars and buildings from real life cityscapes. Aside from some unnerving sound effects, nothing happens to the scenery when you shoot it—which is even more freaking bizarre to us. 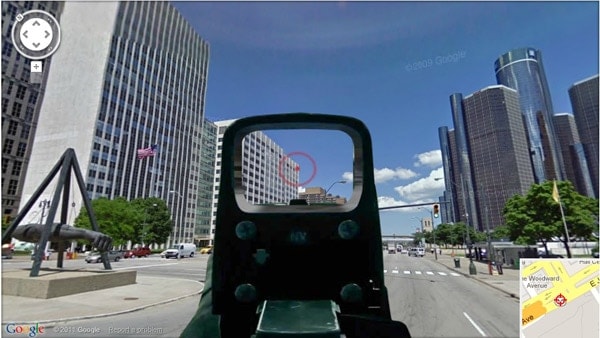 Look, we could have at least accepted it, maybe not approved of it, if it was a game.  You know, something with points, objectives, bad guys and good guys, but it isn’t.  Video games like Call of Duty: Modern Warfare 3 may be gory and glorify violence, but they’re also more visceral and there’s a clear distinction between the character you assume in the game (and the character’s motives) and you the user playing the game.  A “game” that’s just some guy with a gun, kind of shooting at what could potentially end up being a picture of our mother seems more like a simulation to us and when we see companies looking to foster folk’s sick fantasies about shooting up Maple Street, our kook meter goes off.

There’s a little post-script here though, because as we were writing this, we found that the demo site for Google Shoot View was taken down. We don’t know if this means the Dutch are reconsidering this product or what, so no word on a release date for those of you itching to get a vague sense of what it would feel like to go postal in your neighborhood.

As for the rest of us, we’re still looking for the alcove behind the telescreen (and we’re guessing a few of you may need to look that reference up).