Illinois Judge: Names of FOID Cardholders will Not be Released

Should the names of those Illinoisans who are in possession of a firearm owner’s identification card (FOID) be disclosed to the public?

A ruling last Monday by Circuit Judge Michael Brandt in Peoria County says that the Illinois State Police will not have to release the names of the 1.3 million FOID cardholders, putting an end to an ongoing legal battle over whether FOID cardholders should fall under the state’s Freedom of Information Act.

If cardholders were not exempt from FOIA, then their FOID information would have to be disclosed to the public.

Both the Illinois State Rifle Association and the Illinois State Police argued that releasing the names of cardholders not only violated one’s privacy but also puts one’s life in danger.   To underscore this fact, the State Police cited instances were known criminals were requesting the FOID status of their victims and/or specific law enforcement officers. 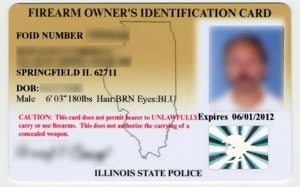 Judge Brandt’s ruling shores up what the Illinois legislature had decided earlier this year when it voted to bar the public from knowing who has FOID cards.

However, and as Richard Pearson, the executive director of the Illinois State Rifle Association, explained to the AP this ruling is significant because the legislature could potentially change its mind on the issue sometime in the future.  Brandt’s ruling provides an insurance policy.

Attorney Matthew Carter, who represented the State Police in the matter, agreed.

Carter told local reporters that the suit continued despite the legislature’s decision because the rifle association and the State Police wanted something more concrete.

“I think that the State Police with some regularity get these FOIA requests,” Carter said. “On the one hand, you can respond to some of them by citing some of the (new law) but this is a lot stronger and a lot clearer way to respond.

“There is an injunction entered and that ends the matter.”

But members of the Brady Campaign to Prevent Gun Violence were not pleased with the ruling.  They supported the Associated Press, who initially requested the FOID information for a news story, which ignited the legal battle (for a more complete history, check out “related stories” below).

Brain Malte, a member of the Brady Campaign, said that sharing FOID card information helps the public and the news media make sure that FOID cards are not issued to felons or those who should not have them.

He told the AP that the judge’s ruling makes it all the more important that government officials “audit the system each year and tell the public how well it is working or not working.’’