Gun Duel Between Steve McQueen and Yul Brynner No Contest

One of the amusing, insider affairs of 1960 film The Magnificent Seven was the on-and-off-camera rivalry (more like an active dislike) between its star Yul Brynner and newcomer Steve McQueen, who only had a TV show (Wanted Dead or Alive) and a part in the Sci-Fi movie The Blob to his credit.

Both men had a charisma that leapt off the silver screen, but that was where the similarities ended. Brynner, a one-time Russian with Oriental eyes and a cat-like agility, was a skilled photographer, author and a major star, appearing in blockbuster films like The King and I and The Ten Commandants.

Compared to Brynner back in 1960, McQueen was almost nobody, really just one of five other actors on the set of The Magnificent Seven including James Coburn, Robert Vaughn and Charles Bronson, another face struggling to make their mark. But McQueen was different. He had a ruthless drive to succeed at any cost.

Vaughn, who would later achieve stardom in the TV show The Man from U.N.C.L.E, commented on it in a 2008 self-biography, A Fortunate Life.

“In 1960 I was signed up for The Magnificent Seven playing alongside Steve McQueen and Yul Brynner,” Vaughn recalled. “Steve was intensely competitive. It wasn’t enough just to be successful —he had to be more successful than anyone else.” 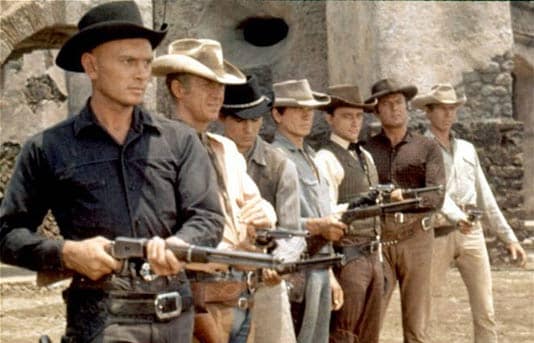 This drive, as many a biographer has postulated, may have been fueled by a troubled childhood. According to many accounts, McQueen inside was an angry man, dreaded by film directors because of the difficulty of working with him.

Biographies explain that McQueen was always making demands trying to change scenes to his advantage. When other actors would be goofing off between takes, playing cards or joking around, McQueen would often be with a director saying, “Can we film the scene this way?”

According to Vaughn, he complained about the gun Brynner was using in the film, a Colt Peacemaker with an ivory grip.

“You didn’t notice it?” McQueen asked. “It has a f*ck’n pearl handle. He shouldn’t have a gun like that. It’s too f*ck’n fancy. Nobody’s gonna look at anything else with that goddamn gun in the picture.”

McQueen also complained about the size of Brynner’s horse, mostly that it was the biggest. Vaughn told him he had the biggest horse.

“I don’t care about yours,” McQueen told him. “It’s Brynner’s horse I’m worried about.”

McQueen at the time couldn’t challenge Brynner’s stardom, but he could try to steal scenes in the film and ultimately the film itself and in this he was largely successful. Stealing a scene is quite a bit more subtle than adding lines or rewriting a script: it means, perhaps while an actor recites dialog, the other actor in a scene does something unscripted, like lighting a cigarette in a strange way or something else interesting to divert audience attention to himself.  This is called in the parlance of 1960s Hollywood (or 2011 Hollywood for that matter) as being “non-giving” or a “self stroker.”

Anyone who has watched the film can see several examples of scene stealing by McQueen. In one scene he removes his hat to properly judge the sunlight in preparation for a gunfight as he sits in a wagon next to Brynner. He takes a shotgun shell and wiggles it, allowing the pellets inside to loudly jiggle. These were unscripted adlibs. 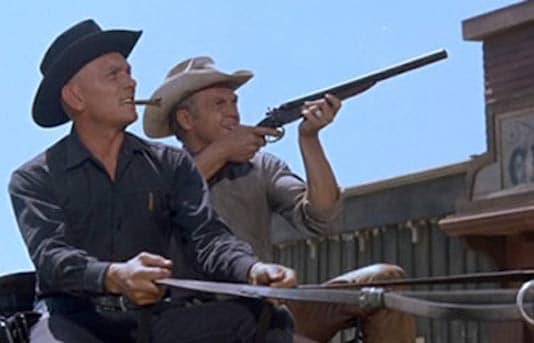 Brynner was less than pleased.

“This annoyed Brynner, who claimed that McQueen was trying to steal scenes,” a biography of McQueen reads. “Brynner also refused to draw his gun in a scene with McQueen, not wanting to have his character (Chris) outdrawn.”

This is where McQueen had it over Brynner. A former U.S. Marine, McQueen had experience with guns and was reportedly good with them. His practiced ability to draw fast with a prop gun was described as “manic.” Brynner on the other hand had little use for guns and little experience with them (though the film makes it seem otherwise at times).

Brynner went on to further stardom, but McQueen soared higher in the 1960s. His performance as the character Vin in Magnificent Seven is what many people consider to be the most memorable of that film. It led to his subsequent appearance in The Great Escape and the famous motorcycle jump performed by stuntman Bud Elkins (doubling for McQueen) that made McQueen a mega-star.