Illinois has some of the toughest gun laws in the country.  And as many of you are aware, it is currently the only state that doesn’t allow some form of concealed carry.

While this sits well with liberals, progressives, and the pro-gun control crowd in Chicago and Cook County, the rest of the state, the right-leaning “downstaters” as they are known, feel that their well-being and their freedoms are being compromised by a hegemony of left-leaning lawmakers.

Many feel these downstaters have legitimate gripes.  For example, in addition to concealed carry ban, many argue that the state’s recent income tax hike was foolish given the dubious nature of the economy.  Moreover, the abolishment of the death penalty has irked conservative downstaters who believe the state’s become soft on criminals.

So, several GOP state representatives have drafted a proposal that calls for the abrupt secession of Chicago and Cook Country from the rest of the state, which would make the Windy City and its surrounding metropolis the 51st state of the U.S. 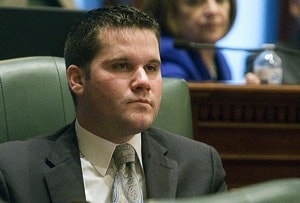 “Downstate families are tired of Chicago dictating its views to the rest of us,” said state Rep. Bill Mitchell as he and fellow Republican state Rep. Adam Brown announced their proposal with straight faces at a news conference. “The old adage is true: Just outside Chicago there’s a place called Illinois.”

However, not everyone is taking the proposal seriously.  In fact, it would appear that most view it as political grandstanding, wishful thinking or some kind of ill-wrought joke.

Charles Wheeler, a savvy Statehouse reporter who teaches journalism at the University of Illinois at Springfield, alluded to another north-south Illinois split – the one between Chicago Cubs fans in the north and St. Louis Cardinals down south – when dismissing the idea to the Associated Press.

“I think it’s goofy. It’s more likely I’ll be the starting first baseman for the Cardinals next April than for this to pass,” Wheeler told the AP.

Also, critics of the proposal point to the state’s financials as a way to dismiss the deal.  The AP writes:

Cook County – which with 5 million residents is the nation’s second most-populous county – is the state’s economic engine and key tax generator, providing substantial contributions to the state’s other 101 counties for everything from schools to roads, colleges and universities, and prisons.

The Chicago area last year generated 81.6 percent of the $652 billion in gross state product, according to Lawrence Msall, president of the Chicago-based Civic Federation, a nonpartisan think tank specializing in tax policy and government research. In 2009, $3.5 billion – some 40 percent – of the $8.7 billion the state collected in income tax was attributable to Cook County, which also was responsible for roughly 36 percent, or $2.2 billion, of the $6.2 billion the state generated in sales taxes, Msall said.

“There’s no getting around that Chicago and Cook County are the goose that lays many golden eggs distributed to downstate counties,” Jim Nowlan, senior fellow of the University of Illinois’ Institute of Government and Public Affairs, told the AP. “Without Chicago and Cook County, the state would be a much poorer entity than it is now.” 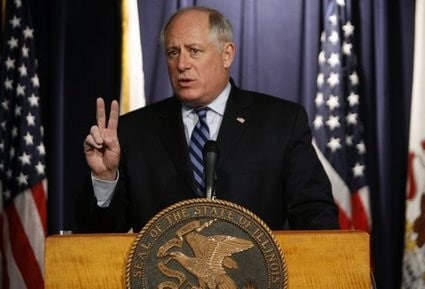 As tempting as it sounds for downstaters, secession is not a practical solution to the state’s woes.  For one thing, the Democratic governor, Democratic-controlled Legislature and Congress would never support the move.

And for another, a famous Illinoisan once said, “A house divided against itself cannot stand.”

If one can give any advice to downstaters it would be stick together, continue to try and work out your differences with your neighbors to the north, and stay the course, and good things will happen.

You may not always agree with your Gov. Pat Quinn, but he’s right when he says, “We’re all in this together.  The idea of separating out and dividing us is a bum way to go. It’s definitely not the Illinois way to go.”