For Students of Gun History: The Smith & Wesson Military & Police Revolver vs the 1911 Government Model

As a breed, gun owners tend to emphasize an object’s history, which is to say we’re concrete people that like specific examples and established, proven performance when it comes to life and firearms.  And as students of things past, we often look to a guns’ story—why it was developed, what it was used for, who carried it and above all its length of use—first when considering a it’s value or seeking an endorsement on its purchase.

The start of the 20th century brought handgun shooters two different yet equally successful designs, both of which were destined to become mainstays in military, law enforcement and civilian arsenals. If you haven’t guessed them already, the guns I’m referring to are the Smith & Wesson Military & Police and (of course) the Colt 1911 Government Model, the two sidearms that perhaps best epitomize handgunning’s greatest, most storied debate, pistols vs. revolvers.

In 1899 the firm of Smith & Wesson created the Hand Ejector First Model, soon to be known as the Military & Police. With the creation of this revolver, Shooterdom also saw the birth of a new cartridge, one which all law enforcement rounds would be judged by for decades to come, the .38 Special. In one manner of thinking stories of the M&P and the .38 special (and its’ development in response to the ineffectiveness of the .38 Long Colt) are inextricable.

The Military & Police revolver also led to the design and addition of larger framed revolvers in the Smith & Wesson stable, such as the .357 Magnum N-frame as well as the .44 Magnum guns, all based on the same basic design of the Hand Ejector. These improvements led to bigger bangs, pushing handgun calibers in more versatile directions.

Akin to our love of history, gun people place a heavy premium on a field testing, usually gravitating towards weapons that have seen their fair share of “real world” service. The Military & Police became the Model 10 in 1957 and despite the fact that by the late 50s a virtual shooting Renaissance was blossoming, occasioning an untold number of new guns and calibers, the old Model 10 revolvers stayed in the holsters of police officers well until the 1980’s (and the entrance of Glock and his Plastic Fantastics), a pretty impressive feat, especially for a wheelgun.

An equally impressive feat is that there have been more than six million of these Smith & Wesson revolvers made to date, making the Model 10, hands down, the most successful revolver in history. 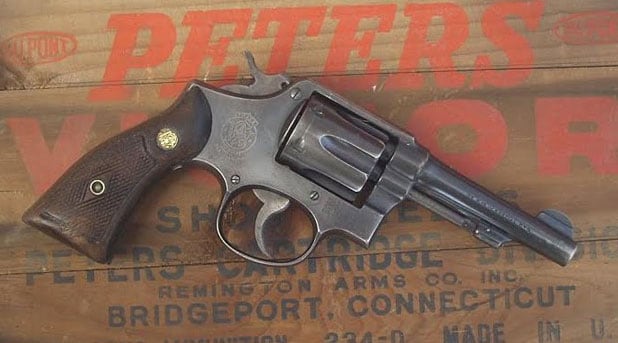 Though certainly not poured from the same glass, the development of what would be known as Colt’s greatest pistol, the 1911, was certainly drawn from the same well as the S&W M&P revolver: like the .38 special, the impetus for the gun and cartridges creation came out of the Philippine-American War and the miserable failure of the Colt 1892 in .38 Long Colt against Moro tribesmen. However, whereas the M&P found favor in the hands of the police, the 1911 would prove fated to see action overseas on the hips of military personnel.

By the turn of the century, the government decided that a new semi automatic pistol was needed chambered in a minimum of .45 caliber. Of the six designs submitted, the Colt fired six thousand rounds with no signs of malfunctions—the major concern when put against the reliable revolver. It’s been said that when the gun got too hot on these early editions, users would simply dunk the all metal frame in a bucket of water.

Released on March 29, 1911, the 1911 Government model went on to serve and serve and serve in the hands of our armed forces in World War I, World War II, Korea, and Vietnam until it was officially replaced by the Beretta M9, also in the 1980’s. Today, despite these changes, it at times can feel like a majority of shooters and soldiers still prefer it and its .45 ACP, seven round magazine to the tiny 9mm and fifteen rounds of the Beretta.

While Colt produced the initial 1911 Government model, today there are dozens of companies making their own version of these venerable pistols, many with basic improvements on the original design. And whether in competition or for personal defense the design of the old 1911 outnumbers any other gun hands down. 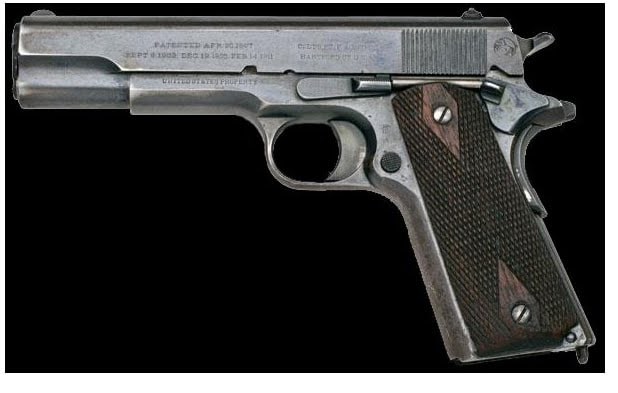 So what does history tell us?

Well how about the obvious: both of these guns sport designs that have served shooters more than adequately for the better part of a century and each did so in a manner that was tailored specifically for its intended use. The Military & Police did well for law enforcement officers who only fired their guns occasionally in qualifications and thus didn’t have a lot of need for gadgetry or safeties.

These were guns meant to be simple and reliable for when those couple of times in a career moments came. The 1911, on the other hand, was designed for one thing and one thing only: for combat and boy did has it seen a lot of it. This is sort of code for firepower and while those initial service pistols might not have been accurate enough to win shooting matches, in combat, in close quarters, there was a time that no better pistol fielded by any other country could match it. Even today there is no better service pistol than the old 1911 and some are still in use by our military in a smaller role.

I have owned and shot both guns and really have a hard time deciding myself which gun I like more. If you have ever shot a nice .38 Special Smith & Wesson M & P with its wonderfully timed action you will fall in love with it; to me that’s just the he and she of it. On the other hand the 1911 with its classic lines points wonderfully and there is no arguing with the .45 ACP in combat. It simply works for what it was intended with no apologies.

So which of the two is better? Neither. I suggest, as students of American gun history, you owe it to yourself to buy one of each and have the best of both worlds.