The Importance of Breath Control to Accurate Shooting

To the uninformed, it may sound trivial, but if you work in law enforcement or are a member of the U.S. military, then you learn quickly that breath control is vital for making accurate shots under adverse conditions.

I would also hazard a guess that most anyone who enjoys shooting pistols, rifles or shotguns for sport, competition or hunting, understands the need for controlling one’s breathing. The very good shooters also understand when to pull the trigger, how to read one’s heart rate and “feel” the heart beating, and to gently squeeze the trigger through between the heart rhythms while quietly exhaling their breath.

For me, the realization of how important breathing is to shooting came when I was 21 years of age and I had already been in combat. I worked for a police agency in northern Virginia just outside the Beltway of Washington, DC, and near the end of my shift, I got the call that a bank robber had been cornered in a house out in the suburbs.

At the time I was armed with a .38 caliber Colt Police Special revolver. I had two speed loaders on my belt, so I thought I was well prepared (yeah, I was still on that steep of a learning curve!).

Arriving at the scene (and foolishly walking towards the side of the house),  I saw the gentleman in question in the second-floor window. He saw me too.  I knew this because he fired three rounds in rapid succession right at me. My response was instant and took the form of a half-gainer into the weeds then behind a large maple tree for cover.

Taking up my position, I whipped out my Colt and fired all six rounds at that window. At least one of those rounds actually hit and broke some glass, but the other five simply created a strange connect-the-dots image to the left and right below the left corner of the window. It was definitely not one of my finer moments.  Just to put that into some perspective, I had been practicing with handguns and rifles since I was eight years old and, perhaps guilty of being young and cocky, thought at the very least I was bound for the next Olympic Games’ shooting events. So much for that! 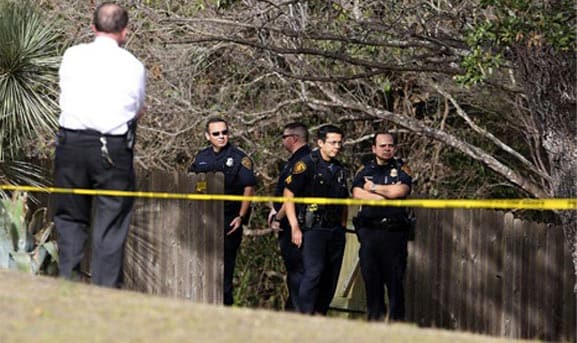 I quickly crouched behind that tree and reloaded with one of those speed loaders I carried. My heart felt like it was coming through my chest and my breathing was completely irregular. A look at my finger tips confirmed that even they were shaking. Yes, welcome to the world where your life expectancy is counted by the grains in other guy’s bullets. Anyway, we didn’t have what you would normally call a SWAT team way back then, but instead a bunch of guys willing to put on a varied assortment of camo gear while carrying scoped ex-hunting rifles. That was pretty much it, and I wasn’t part of their team, just an ordinary patrolman.

The department did have a pretty competent negotiator on the team and he arrived on the scene within about 10 minutes. Using a bullhorn, as the department didn’t have those great phones and communication devices they now all have, he negotiated with the idiot, err gentleman who shot at me, for the next seven hours. All the while I was behind that tree and the closest guy to the house. At about midnight, the negotiator had had enough apparently, and I received the go-ahead to take a shot if one presented itself to me. Breath control, breath control, heart rate, slow yourself down, think pretty thoughts, that girl at the beach. No, no, not that! Breath control, thinking of swaying palms in a light breeze, the sun reflecting off the water, take a deep breath …

There was a light on upstairs, the gentleman’s biggest mistake, because about 20 minutes later he walked back to the edge of the window, and with the front sight nestled right in between the two rear sights, I let them blur and clearly saw the guy’s left arm. I then squeezed off a single round which penetrated his arm right above his elbow. He let out an enormous scream and looked like he may have fallen backwards. With that, all hell broke loose downstairs as there were two thunderous percussions from the flash-bang grenades the SWAT guys tossed in. He was down on his face and in handcuffs within about 15 seconds after that.

Well, the moral of the story is this, breath control is something that doesn’t come naturally, it has to be practiced. Feeling one’s heart rhythm is something most people don’t even think about, but something a shooter has to be aware of. Learning how to control one’s breathing while gently squeezing that trigger through in-between those heart rhythms takes time and, again, endless practice. I’m still learning. By the way, I lost that empty speed loader behind that tree someplace, totally forgot about it.