“That’ll be Chris,” said Andy as he went to answer the door. He returned accompanied by a slightly younger man. We shook hands all around. “Chris is from South Africa, but he did part of his training as a gunsmith in the U.S.”

“Oh, yeah, where was that?” I asked, sitting back down.

“Out in Colorado. With Lenard Bull, then at Trinidad State Junior College, then a year at Rocky Mountain Arms, before returning home to South Africa. I enjoyed it.” He smiled. “Lots of good shooting.”

“How long have you been in New Zealand?”

“A few years. I’m a gunsmith for Beretta here, but I’m qualified by Benelli, Glock, Smith & Wesson, Colt, and some others.”

“Nice,” I said. We started in informal chit-chat about all manner of shooting stuff. He’d gotten to know Andy and Debs through the shooting community locally, and was going to go with us to a different range that evening. At first blush, he seemed to confirm much of what I had learned so far about shooting attitudes and culture in New Zealand—Kiwi shooters being friendly, outgoing people eager to share their hobby—and Chris, despite his South African heritage, seemed to fit right in with my prevailing impression of the island’s shooting community.

Over dinner we discussed a topic that I gather most modern American outdoorsmen would readily associate with guns and New Zealand: hunting, and our conversation definitely touched on “the big shoots” designed to control invasive species. Internationally, New Zealand enjoys the reputation for having a vibrant hunting culture and one as it were that was born out of necessity.

New Zealand had no native mammals until they were introduced by European settlers in the 18th and 19th centuries and, since that time, deer, rabbit, pigs, weasels, and other mammals have caused huge damage to native wildlife and indigenous plants. Without natural predators, humans have to (repeat, have to) fulfill this function and one way Kiwi’s have answered this call is with big sponsored shoots, where teams will compete to see who can eliminate the most rabbits and other pests. There’s an annual “Easter Bunny” hunt that regularly culls over 20,000 rabbits in a single afternoon.

Yes, there are some people who object to such hunts, but the majority of people – the vast majority in rural areas – who consider them vitally necessary and an important component in controlling the pests.

Kiwi’s predilection for varmining explains in part, their affinity for .22 rifles, and why many shooting clubs are set up for these guns. It’s also easier to build a facility that can handle the lower power range of .22s rather than more powerful rifles and when your main use for a gun is point shooting bunnies, you don’t really need much more than this. Such as the range we were going to that evening.

Again, Debs and Andy got their gear out of the safe. Chris already had his in his vehicle. We loaded up and drove the short distance to the range. This is actually a nice facility operated by the local city government, and there are different clubs that operate out of it on different nights of the week. The one our hosts belong to is the Howick Smallbore Sporting Rifle Club.

Because it is a government-owned range, the rules for use are more strict and formal than you might find at many private ranges, but none that I thought to be particularly onerous. Rifles have to be brought in in cases or otherwise wrapped up, with bolts removed or their actions locked open, and taken to the secure area known as the “lay-up room”: 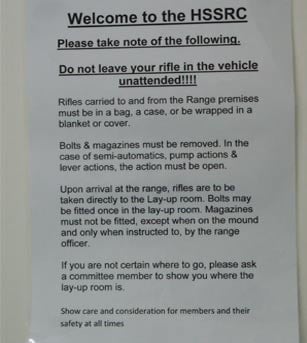 The club has their own locker room, where there is a gunsafe containing a number of loaner guns as well as some of the member’s firearms. Note the suppressors on a number of the rifles in this picture: 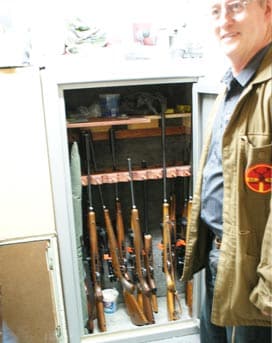 Once again, everyone was friendly and welcoming, and I had the distinct impression that they are very used to having guests and helping new members. Martha and I were introduced to a number of the club members, chatted with them about why we were there, discussed the differences in the shooting culture of the U.S. and N.Z. During the course of these conversations, I found out something very interesting: most of the people I talked with were more knowledgeable about US laws regarding firearms than I was about N.Z. laws.

One such fellow was Dan Keene of Reloaders Supplies LTD in Auckland. He was very interested in my Ballistics By The Inch site, and shared with me another great site by some friends of his there in N.Z.: Terminal Ballistics Research. The folks at TBR have compiled some amazing information about hunting rifle and cartridge performance that I really recommend checking out – it’s all hard data about actual performance with live targets.

After the preliminaries, everyone went out into the meeting room for the formal club business. This included the routine sort of reports and information about upcoming events that any gun club, be it on the continent of North America or on an island in the Pacific, has to run through. Then they went through the safety rules and protocols, taking time to make sure that everyone understood what was required and how to proceed when in the actual range area.

Even as someone who was a complete newcomer to the club and formal shooting in New Zealand, all of it was simple and made sense from a safety standpoint.  It was very much in line with what I have seen here in the U.S. and in Europe at formal ranges.

Once the safety spiel was done, those who were shooting and the Range Officers all proceeded into the range area.

It’s a nice set-up: 25 meters, two levels, with 8 positions each. The walls and ceiling are all concrete, covered in sound-baffling material. The backstop is plywood-faced, filled with ground up tires, well lit and easy to see. Targets were positioned by a Range Officer prior to anyone coming in. Positions were selected randomly by lot, and the shooters took their rifles and ammunition cards and moved into place. 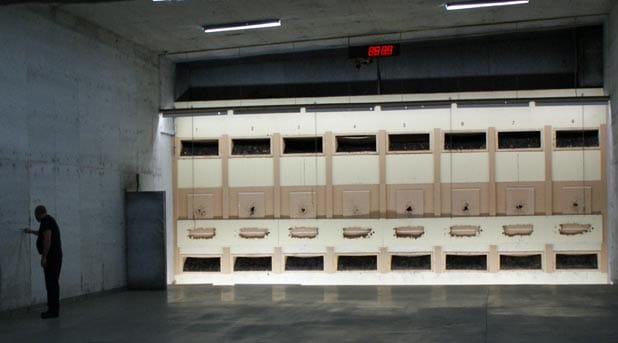 The Range Officer then conducted the shoot, addressing the shooters over a loudspeaker system. Many of the rifles had suppressors, but even those that didn’t were not very loud in this environment, thanks to the design of the building and the use of baffling – simple ear protection was quite adequate. The shoot included a number of different target combinations, shot from prone, kneeling, and standing positions. Each sequence was timed, with a differential allowed for bolt-action versus semi-auto rifles.

It all ran smoothly, even with the predictable glitches and minor problems some of the shooters had with ammunition misfeeds and suchlike. This was an ‘official shoot’, in that it met the requirements for maintaining firearms qualifications, but it wasn’t a competition. Shooters were shooting against themselves, trying to better their own scores rather than beating someone else.

When all was done, everyone cleared their weapons, had them checked by the Range Officers, and then took them back to the “lay-up” room. Afterwards, everyone met in the meeting room to have their targets scored and to chat.

One fun thing: the lights for the range are on a timer activated by coin. Yeah, before a shoot starts, someone has to drop a NZ$ into the slot to turn on the lights.

Martha and I spent more time chatting with people, listening to the conversations around us, observing. It was all relaxed, and friendly, and entirely normal.

We all went back to Andy and Debs for some snacks and more chatting, before we said goodnight to Chris and Andy and Debs gave us a lift back to our hotel. I felt very much like I had made new friends who I would never see again.

But we’ll see. I’d love to have any of them come to the states so I could return their hospitality and share with them some of American shooting culture.