We’ve all been scratching our heads over the announcement of Ruger’s latest revolver, the 5-shot .357 SP101 with a 4-inch barrel.  What does it do?  What is it for?  Who needs it?  We do know this much: it’s prettier than sin and we want one so very badly…

It’s pretty hard to pick out a role where this handgun does well.  The idea is that it’s a kit gun with confidence; it’s a lightweight hiking and backpacking pistol that is chambered for full-house magnums.  But kit guns are for shooting pine cones and tasty beasts that you would never, ever consider eating inside the confines of a city.  Kit guns are usually rimfires just like this.

If you’re worried about bears, a compact (29 ounces, 9 inches overall) .357 Magnum is at the lower end of the oh-crap-bear! spectrum. 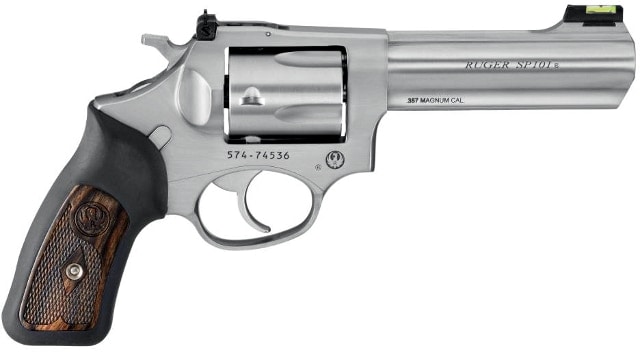 It’s not like you can really compete with one, either.  Run-and-gun and other sports largely focus on 6-shot revolvers; 5-shot backup gun games exist but the barrel on this thing is too long to play.

For concealed carry, we think there are better options.  And we’re not gonna say that it’s a barrel length issue; the barrel’s the easy part of the gun to hide.  This SP101’s profile isn’t a problem.  The slim cylinder and grip would be easy to dress over.  It’s the chunky sights, actually, that we’re not sure fit the bill.  Not only do they look snaggly, adjustable fiber-optic target sights aren’t what we think of when we think EDC.

Of all the nits to pick, though, it isn’t just to slam this revolver’s looks.  We like the full-length, slender underlug, the wood-inlaid rubber grips blend functionality and classic looks, the frame tapering going up to the rear sights; the proportions of this gun are perfect.  It’s a work of art that shoots one of the most capable cartridges ever made.  Sexy and Ruger are not frequently said in the same sentence, but that’s just not true here. 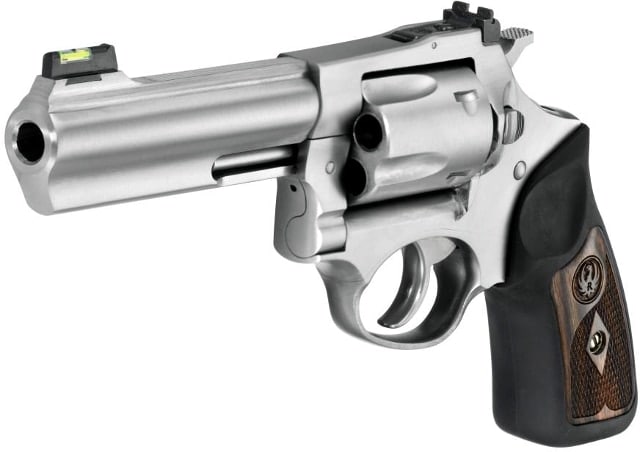 A GP100 is a big gun, and .357 Magnum is a big cartridge made even bigger in a snub-nosed SP101.  While this blandly-named KSP-341X first seems like it doesn’t do anything at all, at 100% of the barrel but ¾ the weight of a GP100, and the grip and handling of other SP101s, makes this gun out to be a great shooter, particularly for anyone with small hands.  And we expect it to sell briskly, priced around $550.

Since the wide-spread adoption of the Picatinny rail, it’s become increasingly easy to forget that some guns just want to get shot.  The 4.2-inch (Canada-friendly) .357 Magnum SP101 has reminded us otherwise.