Christmas 1956: The Year I Got My First Rifle

When I was 10, I spent Christmas at a remote lake-side cottage in the Haliburton Highlands of Ontario.

This is decades prior to the mansions on the water of today and was simply an un-insulated cabin with wood stove, no electricity and of course no indoor facilities. We had to break ice to get water in an area of Ontario that still abounds with moose, bear, deer and wolves and is all but inaccessible in winter.  This is where I developed my lifelong passion for the out of doors.

It was to be one of those old fashioned Christmases when what I believed at the time was the impulsive decision was to pack up everything and have the Yuletide celebration at the family cottage. An adventure certainly and not undertaken lightly because the road into the lake was unplowed, leaving a 2.5 mile walk from the county road to the cabin over what we anticipated was only two feet of unbroken snow.

There were no snowmachines back then and a 4×4 was not in the lexicon of car makers except for the exotic International ones. Nobody had even heard of a Japanese vehicle let alone an SUV so we loaded a toboggan on top of the 1957 Pontiac and headed north.

This was hopefully going to be a significant Christmas for me as I had been lobbying very hard for only one gift, a .22 rifle. I wanted to learn to hunt in the worst of ways.  There were certainly not the prohibitions today in giving a 10 year old a weapon, but it was generally accepted (and to my youthful displeasure, normally it occurred) when a boy was 14 or 15.  Hey, I was a gun nut even back then. 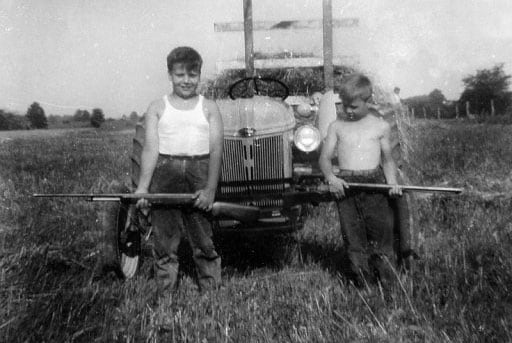 My stepfather negotiated the snow clogged highways right up to the county road turn off and then, taking broad aim, revved up and just floored it taking us as far up the snow-bound cottage road as possible, eventually spinning the car around sideways.  With a great big grin he looked at my white knuckled mother and said “we will walk from here”.

The six-foot toboggan was loaded carefully with boxes of foodstuffs, gifts and luggage and we set off in the looming darkness with my stepfather breaking trail and, like Ol’ Saint Nick himself, hauling “all the toys and goodies on his sleigh’.  I was very optimistic when we started loading up the toboggan but that hopefulness faded to disappointment as I watched the last parcel secured to the sled.  Reluctantly I resigned myself to the cold hard truth I wasn’t getting a gun for Christmas this year; as much as I would have liked to have thought so, even at age 10, I knew you can’t disguise a rifle as a turkey.

Thankfully, there was nothing to do but forget about it because as we trudged our way in the excitement of the adventure began to take hold of me in the form of very low temperatures, deep snow and a feeling like I was in the very heart of the wilderness.  The cottage was found and fires were lit, chasing the stagnant chill from the cabin.

My aunt and uncle had followed us north to surprise us with their company for the Holiday. They ‘parked’ behind the Pontiac and had pulled their own toboggan in with presents, a miniature pine, and, yes, a single shot .22 Cooey model 75—my very first rifle and the gun that led to my lifelong love affair with hunting and firearms.  It is still in the family gun collection today, only it belongs to my son.  He received the same rifle on his 10th Christmas.