Ruger’s LCR is a surprisingly fun gun to shoot, and it’s good at its job.  It’s job is to be small, light, and shooty.  The hybrid frame and Hogue grips make it an extremely soft shooter, at that.  But it’s still a snubbie, and no one likes to practice with ’em no matter how nice they get.

In .357 Magnum this gun weighs seventeen ounces, and in .38 +P thirteen.  The recoil-mitigating properties of rubber and polymer can’t entirely absolve those cartridges’ recoil in this lightweight a package.  You would have to hand-load .38 down to nothing to be able to practice in long stretches with any LCR. 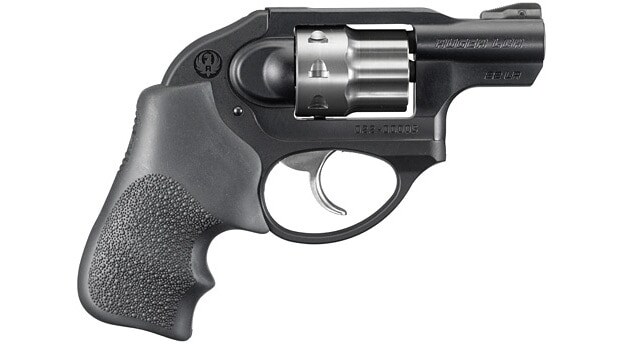 Ruger solves this with another product, (nice work if you can get it) the Ruger LCR-22.  About the same size package as an LCR in .38 Special, weighing slightly more at fifteen ounces, this 8-shot 1.75-inch-barreled revolver sounds like a great trainer and woods gun.

“I clocked the Federal .22 Long Rifle ammo I used for my review at an average velocity, twelve feet in front of the muzzle, of 922.7 feet per second. They were 36 grain hollow points which, at 922.7 fps, have a kinetic energy of 68 foot pounds. Compared with a typical 158 grain .38 caliber round delivering about 200 ft.lbs. of energy, the .22 looks pretty wimpy, and it is. Definitely not your first choice for a defensive gun. But, in certain situations, it could be enough.

“As you can see in the photos, it was enough to punch holes through a piece of 1×2 pine at 21 feet. That doesn’t translate directly into stopping power, but it does show that it would be likely to punch through 1/4 inch of skull at the same range, regardless of the species of predator. In any event, any gun is better than no gun, so a .22 in your pocket is 100% better than a .45 in your gun safe. “And did I mention it’s fun to shoot?”

This little guy has exactly the same MSRP as the basic no-frills LCR in .38, or $525.  Like that LCR, we expect this one in .22 to have a real-world price of about $400.  It would have been nice if, like other Ruger .22s and kit guns, this one came with a fiber optic front sight, but those are cheap and easy to find and install.

How many of you just put this .22 on your wish list?