Today marks the first day of Festival of Lights i.e. Hanukkah or Chanukah or however we’re spelling it this year, and despite the fact that Guns.com usually gets an earful around this time of the year from our Jewish friends about how Hanukkah isn’t really that big of a deal to members of the Tribe and we don’t need to treat it like Christmas, we can’t let them think they’re not on our minds during the holiday season.  Happy Hanukkah, guys.  Knowing you has truly been a mitzvah in our lives.

It seems to us that Jews and guns are a match made in heaven. Rich in tradition, the Jewish people have historically given the world some of its finest craftsmen and engineers and a history of extreme persecution combined with a backed-into-a-corner, surrounded-by-hostiles kind of existence has molded the Israelis into one of the world’s toughest armed forces.

So it should come as no surprise to us Westerners that since the ’50s, some of the most unique, outside the box gun designs originated in the Promised Land.  Here are five of our favorites: 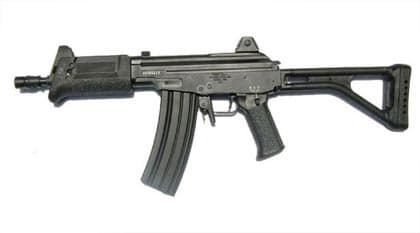 We yanks have our M16s, just about everybody else has their AKs, but for the bulk of the 20th century, when Israeli’s needed to kill absolutely, positively every last motherlicker in the room, they reached for their Galil assault rifle.

Tracing its espionage induced design origins to the AK and the Finnish Valmet, the standard Galil is tendered in both 5.56mm and 7.62mm and comes in three flavors: the Galil ARM with carrying handle and a bipod, the Galil AR, sans carrying handle and bipod and the short barreled Galil SAR. The Galil can even be used as a light machinegun when fitted with 50-round magazines

And it’s a bottle opener too!  That’s right, all three models come with bottle openers attached to the gun.  Though officially this feature was included to discourage soldiers from using other parts of the rifle to crack a few cold ones, we like to think it’s more of a comment on Israeli fatalism, like saying “we’re armed even when we’re relaxing.” 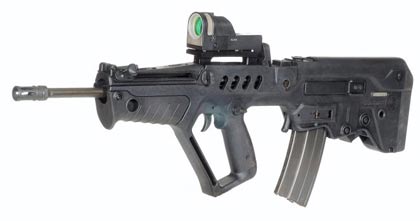 The Galil is still widely used by Israeli Defense Forces, although most units in the field are now equipped with ultra-modern replacements like the TAR-21 (like mount Tavor and 21st Century), which is now the standard issued weapon of the Israeli infantry.  A bullpup assault rifle chambered in 5.56×45mm NATO  (occasionally 9mm Para), the ubiquitously Israeli Israeli Military Industries (now Israeli Weapons Industries) turns out thousands of these tough little guns a year, combining carbine length with rifle muzzle velocity.  And each comes with a laser and scope.

Plans for a semi-automatic, American made version of the Tavor gave us all goosebumps at the 2002 SHOT show when Barrett announced plans to pursue the design, even going to far as to strut around the conference center with a prototype.  The gun never came to be though nor did the promise of civilian legal imports through the now out of business Charles Daly. Oy!

The Negev (like the desert) replaced the Galil as the IDF’s official light machine gun in 1997.  Chambered in 5.56 mm NATO the system uses propellant gases from the barrel to cycle a short-stroke gas piston operating system under the barrel and a rotary bolt locking mechanism. IWI now makes a Negev Commando which is a shorter and lighter version of the standard Negev light machine gun, also known as the Assault Negev. 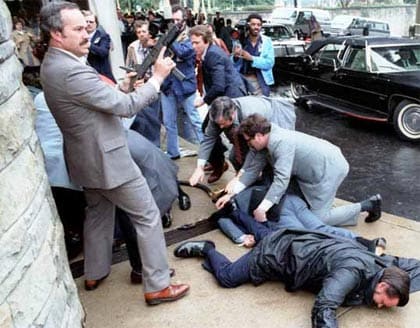 What can we say about the mother of all submachine guns that hasn’t already been said?  Designed and developed by weapons maven Major Uziel Gal in the 1940s, Israel’s most kosher gun has found a home under the jackets of elite infantry assault forces, officers, artillery troops, tankers the Yamam or Israeli SWAT team and of course US Secret Service agents guarding President Reagan.

UZIs are all open bolt and blowback-operated with variants ranging in size from micro-uzi machine pistols to folding stock silenced assault rifles. Exported to over 90 gentile countries and made by too many manufacturers to list here and have it still have it be interesting (FN Herstal gets a nod though), all Guns.com can say is l’chaim. 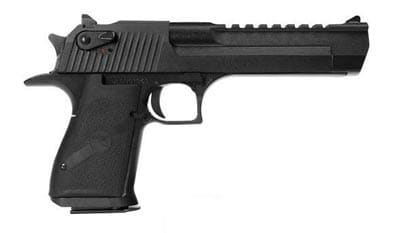 Yeah, yeah, yeah.  We know it’s for divorcees and pimps, but you can’t talk Israeli guns without mentioning the Desert Eagle.  Whether you think it’s the most powerful thing you can fit between two hands or a real piece of schlock with a reputation for feeding glitches and a tendency towards garish flare, the large-framed pistol has been copied, stretched, recalibrated, shortened, lengthened, tinkered with, torn down, built up and just simply renamed by manufacturers from Magnum Research to Kahr arms since 1983.  What can we say, like it or leave it, the gun has real chutzpah.

So there you have it, Guns.com top five Jewish guns.  Happy Hanukkah. Now why you find yourself a nice Jewish gun to settle down with and add it to our comment section below?