In the late summer of 1985 I received a rather unique invitation from a couple of Israeli colleagues while working in Colombia for the State Department. That morning I had answered a knock on my door and ended up having lunch with two guys fresh off the airplane from Tel Aviv.  These men wanted me to share my talents pursuant to firearms with them and their government in Israel.

I would train, I would teach, I would learn how the people of Israel use guns and other weapons. Back then, it seemed every morning confronted me with the reality that your life changes without so much as a warning shot.

Two days after that meeting I was back in Washington, DC and having another meeting, this time with my boss at the State Department. A couple of weeks after that, I received the approval needed to work for our government and concurrently for the State of Israel. Within the following month I would be traveling back and forth between my home in Newport, Rhode Island and Israel about once every other month or so.

The trips were no more than long weekends, three or four days at the very most, but what they entailed was nothing short of amazing. I had inexplicably become what amounted to an adjunct member of none other than Israel’s version of a country-wide SWAT team, the Yamam, or Special Police Unit, and this allowed me to tag along as the Israelis practiced tactics (seemingly endlessly).  Day and night I got to shadow elite operators as they conducted live fire drills and demonstrated techniques that were foreign even to this world traveler. 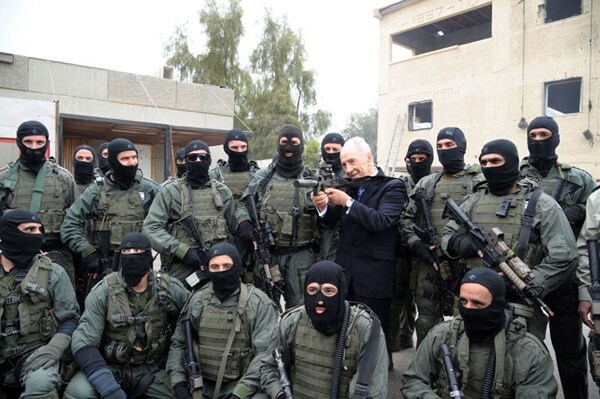 While there, I learned roping techniques similar to rappelling, but with your head facing down instead of upwards. I was taught how to disguise myself to look Arabic, not an easy trick for someone with a purely Scottish genetic background. They taught me how to take apart things like live Katyusha rockets, and various other assorted nasties

But the thing Israelis really, really know about, the thing I don’t think there is another country in the world with more expertise in this area defense, are bomb vests—and for a nation full of suicide bombers, you probably could have guessed this eventually.  I learned so much about bomb vests and what to look for and how to spot someone who may be wearing one. I was also taught some techniques about long-range sniping that had never occurred to me before (and I thought I knew everything) but when it came to shooting, the major difference between Israel and America training is our philosophy on close-quarter or urban combat.

The Uzi sub-machine gun became part of my standard kit, and I became as familiar and comfortable with that weapon as I had been with the great MP5 I had used previously.  During CQC exercises, we were taught to advance upon enemy positions while squeezing through round after round, magazine after magazine on full automatic.

The biggest difference between what the Israeli’s did and what we Americans were trained to do was that they would oftentimes suggest going almost headlong at an enemy position while firing through whole magazines.  It usually took a matter of seconds to burn through a magazine, so fast reloads factored heavily into ones success.

In training, we would advance by increments of 40 or 50 meters at a time in urban settings, all the while firing on full-automatic. Back in the states, the attack is more controlled.  We were taught to perhaps squeeze off rounds in three-second bursts and then seek cover.  This is not the way of Israeli security apparatus and though it may be too bold in every circumstance, in the right scenario, I cannot think of a more effective way to gain ground—and it looks like I’m no the only one.  Our unbelievably talented Navy Seals have adopted some of these Israeli CQC techniques and, depending on the situation, will open fire on full-auto while either advancing or getting to an exfiltration point following an attack.  Now that’s an endorsement.

I sometimes wake up at night now thinking about all those great Israeli exercises. Mostly, what I can tell you about the Israeli military is that they train often and they hard.  Back then, I found that their tutelage instilled in me the very real belief that if I just allowed myself to be molded by these people, I could be pretty much unstoppable. I was still on a very steep learning curve.