The 2011 survey found that 74 percent of respondents indicated approval of legal hunting, 42 percent said they strongly approve. Overall, this level of approval is in line with the proportions of Americans who said they approve of hunting in survey conducted by Responsive Management in 1995, 2003 and 2006.

Additionally, the survey pointed out that “while only about a tenth of the American population hunts each year (reflected in the percent of 2011 survey respondents who said they had hunted in the 12 months prior to the survey), 95 percent of respondents indicated agreement when asked, “No matter your opinion on hunting, do you agree or disagree that it is okay for other people to hunt if they do so legally and in accordance with hunting laws and regulations?” 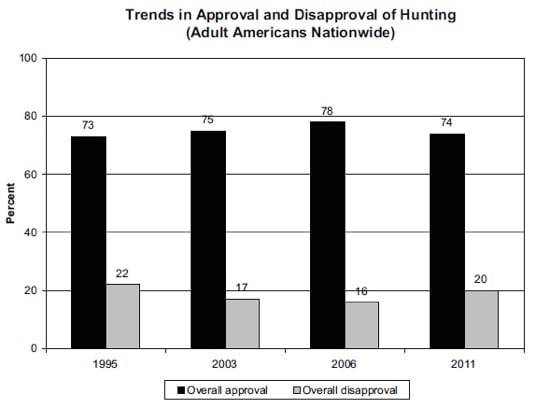 The survey stated that “A large majority of Americans support the right of their fellow citizens to engage in shooting activities: 71 percent of respondents in the 2011 survey indicated approval of legal, recreational shooting, with 44 percent saying they strongly approve.” 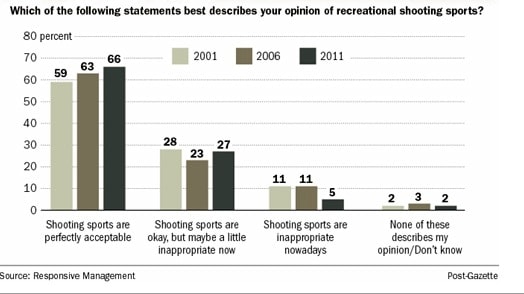 “We don’t have good comparative data before the 1990s, because people were asking the question in different ways,” Mark Damian Duda, executive director of Responsive Management told the Post-Gazette. “We know from past opinion polls there has been a remarkably stable positive public opinion on hunting, fishing and the shooting sports. We keep finding that in every state — in [Pennsylvania] I think it’s 81 percent in support of hunting.”

And PA state Rep. Marc Gergely (D-White Oak) provided additional insight to the Post-Gazette to explain the public’s support for hunting and shooting.

“I think the National Shooting Sports Foundation and National Rifle Association — and in Pennsylvania, the Game Commission — have done a very good job of educating the public that hunters and people who legally own guns aren’t criminals. We are law abiding citizens,” said Gergely.

“The argument used to be, guns are bad, and that impacted their perception of hunters because we have guns,” he added. “Now, I think the conversation has shifted to, it’s not the hunters and target shooters, not the owners of legal guns that are causing [gun violence] problems. It’s the illegal ownership of guns. That’s the problem. Everyone wants to find ways to go after them . . . and prosecute them.”

The survey was done over the telephone (both landlines and cell phones were called, according to researchers).  A total of 930 randomly selected U.S. residents, living in all 50 states, ages 18 and older were contacted.  The age demographics were proportioned to be representative of the U.S. as a whole.  And the gender split of the survey was approximately 49 percent male and 51 percent female to mirror the U.S. Census.

The study was commissioned by the National Shooting Sports Foundation and conducted in August and September by Responsive Management research personnel.

Findings were reported at a 95 percent confidence interval (or higher), with a sampling error of plus or minus 3.37 percentage points, the survey stated.