I want a M21 Sniper Weapon System and fortunately for you, Mr. Claus, you won’t have to take incoming fire and land the reindeer at Kandahar to pick one up this year. Just head over to Geneseo, Illinois and grab a Springfield Armory’s M21 Tactical.

I’m a purist. I like wood. Deep-grained well-oiled walnut or cherry wood meshed with metal – parkerized metal in particular. That crisp clean matte associated with military weaponry. And although the allure of a brand spanking new AR-15 is quite palpable, I’d like my next rifle to have the ability to really reach out and touch someone, so to speak.

Sadly, the 5.56 just does not cut the mustard for me at 600+meters. I need something with…severity. Something that can knock a bear – or at least a slack-jawed zombie—on their ass. 7.62×51 NATO sounds just about right, plus it’s rumored to soon be available in bulk, due to the draw down in the Middle East.

I researched this extensively (as every gun aficionado should) and drew my bead on the US Military. What I found was the United States Marine Corps Designated Marksman Rifle (DMR). But the McMillan tactical stock just didn’t sit right with me, so I investigated further.  Scoured the Internet (i.e. went to Guns.com), spoke with fellow veterans, police, “security contractors,” and I finally found my baby: the M21 Sniper Weapon System – another darling of the Marine Corps.

Developed in the late 1960s, the M21 Sniper Weapon System was the brainchild of several government agencies, all-attempting to create a primo semi-automatic sniper rifle. And they were pretty darn successful – the weapon remained on active-duty until 1988.

In its truest form, the M21 is essentially a modified M14. The storied Rock Island Armory was awarded the first military contract to convert some 1,500 of these M14s into precision match grade sniper platforms. Yet, despite its birth several decades ago, it can still be seen on the battlefield of today’s US Armed Forces. Call me simple, but that’s all the assurance I need to add the civilianized version of the M21 to my toolbox. 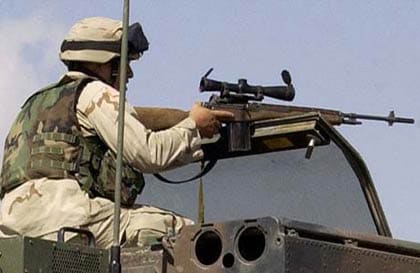 It features an adjustable walnut stock and National Match guts. As per Springfield Armory’s website, the M21 Tactical “is the ultimate tool for the law enforcement sharpshooter.”  But let’s get down to the brass tacks – the M21s specifications. Like all M1-type rifles, the Sniper Weapon System is gas operated, with a rotating bolt. Chambered in 7.62×51 (or .308 Winchester), with a muzzle velocity hitting 2,800ft/sec, the maximum effective range of this beast comes in at 754 meters.

Five, ten, and 20-round box magazines rest solidly below a 43.98-inch frame. She’s a bit heavy at 11.6 lbs. unloaded, but quite capable of shouldering those powerful NATO rounds. Unfortunately it carries a fairly hefty price tag despite being sans telescopic optics – but hey, Santa has it covered, right?

Let’s talk looks. As I mentioned before, I like wood (get your mind out of the gutter, gents). With the M21 tactical, you’ve got a lot of wood. Beautiful well-oiled walnut and a choice stainless steel Krieger barrel – classic Americana all the way.

At a recent visit to my local rifle range, I happened on a gunner firing the aforementioned rifle. He graciously allowed me to put a few rounds down range and wow – you’ve definitely got a barbarian snugged up against your shoulder. Hands down the loudest girl on the rifle line and the apple of many fellow shooters eyes.

Well Santa, I understand I don’t need another rifle – and I sure as heck can’t afford one at the moment—but I’ve been fairly good this year.  I donated to the VFW and even picked up my brass in the California High Desert.  So can you help a former Devil Dog out? Remember, it’s a Springfield Armory M21 Tactical – don’t shortchange me with some M1 parts gun or an SKS – because I’ve always wondered how reindeer tastes.  Just kidding.  No really, I know where you live…

Sniper rifles seem to take the prize as our Guns.com writers dream gift this Christmas.  What’s guns or gun gear are you asking Santa for this year?