General Casey Appointed to the Governing Board of Colt Defense

Earlier this month, General George W. Casey, Jr., U.S. Army (ret.) was appointed as a Manger of the Governing Board of Colt Defense LLC.

Before joining the Board, Gen. Casey served as the 36th Chief of Staff of the United States Army, for four years, from April 2007 to April 2011.  In his previous assignment, the four-star general was Commander, Multi-National Force – Iraq from July 2004 to February 2007. 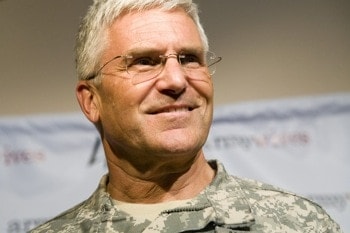 Gen. Casey holds a Masters Degree in International Relations from Denver University and has served as a Senior Fellow at the Atlantic Council of the United States.

“We are proud to welcome General George Casey to our board,” said Gerald Dinkel, President and Chief Executive Officer of Colt Defense LLC.

“His experience and success as a military leader in the most challenging and complex environments makes him an ideal person to contribute to our strategic planning, business execution and overall corporate governance.”

Colt Defense LLC, together with its subsidiaries, is one of the world’s leading designers, developers and manufacturers of small arms weapons systems for individual soldiers and law enforcement personnel. The company’s portfolio of products and services meets evolving military and law enforcement requirements around the world. Colt Defense LLC has supplied small arms weapons systems to the United States Government and other governments throughout the world for more than 160 years.