What is the Greatest Handgun Cartridge of All Time?

So what is the greatest handgun round of all time, the top dog, big cheese, the head honcho? Well, the answer is not going to please everyone, and some will disagree, but there is one round that over the years has never lost its popularity and can do pretty much anything asked of it (within reason). That cartridge is the .357 Magnum.

Before fans of other rounds start yelling at the monitor just hear me out. Let me give you a bit of history on the old round that has been a staple of the handgunning world since 1935.

In the early days of the 20th century the .38 Special came into being and it didn’t take shooters long to figure out it was a lousy manstopper. What gunnies didn’t know in those days was that the factory bullet for the .38 Special was dreadful and more often than not the shooter was left with a 158-grain lead round nose. Later bullets would make the .38 Special much better, but that was decades away.

In response, shooters like Phil Sharpe and Elmer Keith quickly began hot rodding the .38 Special into the .38-44 which jumped the velocity from 800 fps to over 1,100 fps.  This came at a price though—the round could only be used in the new Smith & Wesson Heavy Duty and Outdoorsman revolvers and would quickly dynamite a lesser gun.

So in order to keep shooters from blowing up their revolvers by accident (and keep up with reloaders) the .357 Magnum was developed between Winchester (not Remington as has been reported over the years) and Smith & Wesson. The new gun was known as the Registered Magnum and the new round was a lengthened .38 Special that could be fired only in the new revolver. 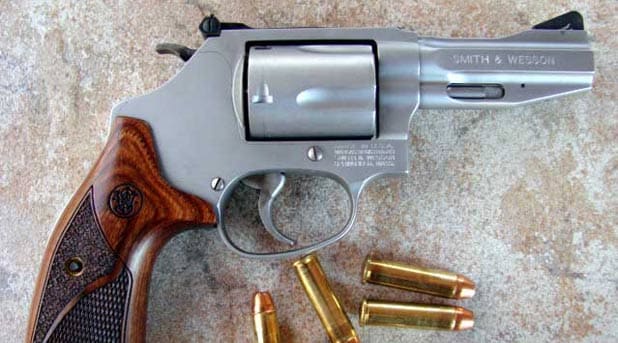 The revolver and cartridge quickly found favor with law enforcement agencies like the FBI and other departments nationwide. Handgun hunters like Douglas Wesson also found that the new round was light years ahead of anything to come out of a handgun at the time. The earliest factory rounds were 158 grain cast bullets and would do better than 1,500 fps. Douglas Wesson used the new revolver to take game animals like moose and grizzly bear proving beyond doubt the rounds usefulness in the field.

The .357 Magnum is still capable of taking big game animals even though some say it doesn’t have enough compared to the big boys like the .44 Magnum and larger. While that is true, part of the problem with the .357 is that the factory loads are not what they used to be with most coming out of the factory only doing about 1,200 fps. This is a response to revolvers getting smaller and lighter; as it was at it’s inception some simply just cannot handle the round.

Those who handload the .357 however know exactly what the round is capable of and in the right revolver with the right bullet it can easily takedown whitetail deer. But that’s only half the story really because in comparison to other big game pistol calibers, the .357 really outshines them with it’s versatility.

One thing that the .44 Magnum is not known for is its ability to be used on small game. The .357 comes into its own as an “any game” round here and I don’t even mean its ability to chamber .38 Special rounds (which it can). Rather I’m referring to the fact that a .357 loaded with a lighter bullet and less powder can be used to take rabbits, squirrels, and grouse effectively. Try that with a .44 Magnum someday and see what’s left of the meat you were planning to put in your freezer.  It will look more like road kill than a clean kill.

Than there is the matter of personal defense, where the .357 Magnum has few equals. The 125 grain jacketed hollowpoint has long been a favorite with law enforcement even though revolvers are no longer in vogue and you are more likely to find them in the hands of retired LEO’s than current employees. Still, the .357 has maintained a reputation for being more than enough to put the bad guys in their place.

When it comes to costs, the .357 Magnum is cheap to reload and bullets are everywhere whether they are cast lead or something in a jacket. It also takes much less powder to fuel one of them compared to just about any other big bore.

For more than 75 years the .357 Magnum has been at the top of the heap of handgun rounds. It has outperformed many that were supposed to put it in a rocking chair and it keeps right on going. And in my estimate, no other round has the versatility and range (no pun intended) that the .357 Magnum has. Some might be better at taking down game, and others are supposedly better when it comes to personal defense, but none do both as well as the .357 Magnum. In my eyes, because of this versatility, it has proven itself to be the best handgun round overall.