Fast and Furious Not Going Away for Holder; More Hearings Scheduled (VIDEO)

Despite making several recent appearances before congressional investigators (the Senate and the House Judiciary Committees), Eric Holder is not done testifying on the DOJ’s involvement, or lack thereof, in the seriously flawed gunwalking program known as Operation Fast and Furious.  At least according to Rep. Darrell Issa (R-CA), the point man of the House investigation.

This past week, Rep. Issa sent Holder a letter that asked him to testify before the House Oversight and Government Reform Committee on Tuesday, Jan. 24, 2012.  The topics to be discussed are, according to the letter:

The hearing will examine flaws in the management structure of the Justice Department as demonstrated in the genesis and implementation of ATF’s Operation Fast and Furious.  Specifically, the hearing will focus on what senior Department officials could and should have done to put a stop to this reckless program, as well as the specific areas where failures in communication and management occurred. The Department’s February 4, 2011 letter to Congress will be but one example of these failures in management.

One will recall that the Feb. 4, 2011, DOJ letter to Congress was so rife with errors and misinformation that it later had to be recalled.  What’s more is that Holder even admitted in his testimony before the House Committee on December 8, that, “It is unheard of for letters or testimony to be taken back,” leading one to believe that “failures in management” may be an understatement.

If Jan. 24 presents a scheduling conflict for the Attorney General, Rep. Issa was kind enough to include six alternate dates on which the hearing can be held.  In other words, Issa is not letting Holder off the hook.  Holder has until Jan. 3 to respond to the invitation.

But testifying once again before a congressional committee may not be Holder’s biggest problem.

His biggest problem might be the growing number of people who are calling for his resignation.  Currently, 60 congressmen, two senators, two sitting governors, and every major Republican presidential candidate have called for (a) Obama to fire Holder or (b) his immediate resignation. 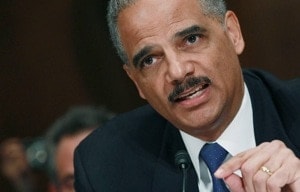 Additionally, the Daily Caller reported, “seventy-five congressmen have signed onto a House resolution for a vote of ‘no confidence’ in Holder as attorney general. Between the two lists, there are 86 total in the House who no longer trust Holder to head the Department of Justice.”

How has the Attorney General responded to such criticism?

In an interview with the NY Times, he stated that the criticism he has fielded on Fast and Furious is not due to gross mismanagement or incompetence but is politically motivated and racially driven.

“This is a way to get at the president because of the way I can be identified with him. Both due to the nature of our relationship and, you know, the fact that we’re both African-American,” Holder told the NY Times.