On Nov. 1, Wisconsin became the 49th state to allow concealed carry.  This early Christmas present prompted a rush from law-abiding citizens who have long wanted to exercise the fundamental right of self-defense.

The numbers are in and in less than two months 56,000 people applied for CCW permits, that’s 1% of the state’s population.  Moreover, it’s estimated that thousands more bought handguns as the state background checks are up 50% for the year.

To process the deluge of CCW applications within the time frame specified by the state legislature – 45 days to process apps in the filed in Nov., 21 days for apps filed after that – lawmakers gave the Justice Department what they thought was a sufficient staff of workers, consisting of one full-timer and 10 part-timers.

However, as it turns out, that staff may not be large enough to meet the unflagging demand as the timetable for processing tightens to 21 days.

Jeff Szymanski of Greendale experienced a slight delay himself.

Szymanski told the Milwaukee-Wisconsin Journal Sentinel that he mailed his application on Nov. 4, and that the state cashed his $50 check for the application fee on Nov. 17, but he didn’t receive his concealed carry permit until this month, 33 days after he applied.

“They did come through. They just took longer than I thought,” Szymanski said of DOJ.

Szymanski told the Journal Sentinel he hadn’t used his permit yet and didn’t expect to use it very often. He said that for him it was more about the principle that law-abiding citizens should be able to be armed.

“It’s nice to have it,” Szymanski said of the permit. 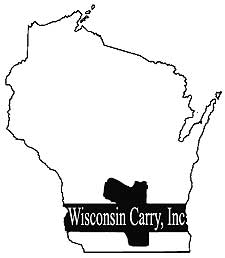 According to DOJ statistics, as of Dec. 11, a total of 24, 821 people had had permits approved by the state and only a small number – 296 people – have been denied.

Among those denied, an even smaller number – “fewer than two dozen” – have been rejected because of serious reasons such as their criminal records or mental health history, Brueck told Journal Sentinel.

Most of those who’ve been denied were denied because their information didn’t match state records, according to Brueck.  This, of course, leaves open the possibility that the applicant could resubmit the paperwork with the correct information and receive a permit.

***For those who live in Wisconsin and are thinking about obtaining a CCW permit, Wisconsin Carry, Inc., is offering FREE training classes throughout the state that will satisfy Wisconsin’s mandatory proof of training requirement.