When I was growing up the one time of the year I always looked forward to was Christmas. It is still a magical time for me, for all the obvious reasons, but also because now the giving of gifts to show the love we have for family members has become so much more important to me than the actual receiving of gifts. That wasn’t always the case, however, and as a nine year old child I practically demanded that my parents somehow wrangle a .22 rifle out of good old Santa Claus.

Allow me to set the scene: that wonderful day was approaching, no more than a week away, and it was Saturday when dad said he was getting ready to go and buy a Christmas tree.

“Do you want to come along, Johnny?” he inquired.

He looked down at me like I had three heads because there was never a moment when I wouldn’t want to catch a ride with my father to go do something. But this day I had other things in mind. 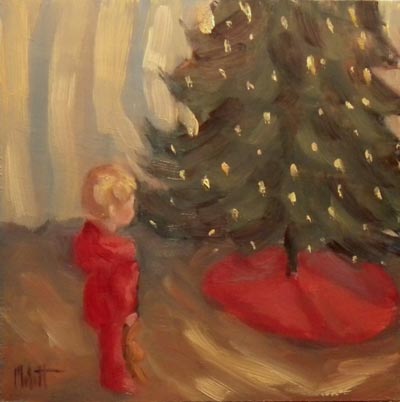 As a boy there wasn’t too much that would escape my attention, and that one long box the mailman had delivered the week before looked suspiciously like it was the right size and shape to fit none other than a .22 rifle.  Additionally, the day it arrived my mother suspiciously rushed it up to her bedroom and, inquisitive by nature, I followed her up the stairs, very quietly.  I managed to get a peek of her slipping it under their bed. So, it had to be the rifle, what other explanation could there be?

Well, dad left to go get the tree along with my mother, and my brother and sister were off someplace doing their thing, so I bolted for the stairs, ran headlong up the stairs and dove under the bed. To my disappointment the box was gone—it took me almost a full hour of looking, until I found it hidden away behind some stuff in my dad’s hallway closet. It was wrapped for Christmas, along with the little name card that read: For Johnny, from Santa and his helpers. Jackpot!

I used to make model airplanes back then out of balsa wood, and I had in my possession a very sharp knife that I used for building those models. With that in hand I went to work unwrapping my present. First the outer layer of colorful gift wrapping, being very careful not to disturb the ribbon or the bow, and then the box itself, cutting away the tape at an angle on one end only, and sliding out the contents. There before me on the cold hardwood floor was a brand new, beautiful Crossman Model 140 .22 caliber bolt action rifle. My heart actually skipped a beat. Along with that rifle was a small box of ammunition, just 50 rounds. 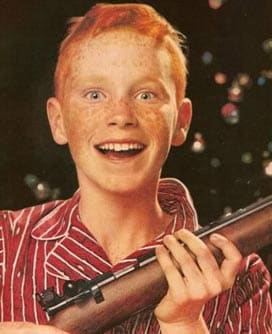 The year before I had been given a Daisy BB gun, and feigned surprise and delight when opening it up on Christmas morning. Dad was upset because all the BBs that were supposed to be in the box with the rifle were gone. Little did he know that I had unwrapped and rewrapped that rifle something like 20 times well before Christmas morning and had used up every one of the BBs.

With the rifle and the box of .22s in hand I headed for the back door, going right to work shredding paper targets, tin cans and two glass milk bottles. It should have come with a sound suppressor, because one of the neighbors must have thought that World War III had started next door and called the police.

They arrived on the scene right around the same time as my parents with our tree on top of their car. Well, the rifle was taken away from me and I was grounded, “until further notice.” Dad was always so formal about his wording when it came to really important things like one of my transgressions, and I bet I was the only kid in the entire neighborhood who found himself grounded on Christmas day!