Z-Max hit the deck like a concrete donkey.  A crafty blend of our love of zombies as well as a fine premium ammo to stock up on, Z-Max ammo instantly put Hornady into the spotlight and probably earned a bit o’ scratch at the same time.  They’re expanding on it, for loaders.

Hornady teased the new line a little while ago, with the same stalwart survivor, the infection now going zoonotic: it’s traveled from the infected people to the now zombified, well, you watch it.

So they’re going to start selling 500-count boxes of varminting-related Z-Max bullets in the following calibers:

We’re not sure what constitutes a varmint that requires a .30 caliber bullet, but hey, zombies is zombies.  All of the new bullets feature the same hollow core and polymer tip insert that makes these bullets expand so consistently. 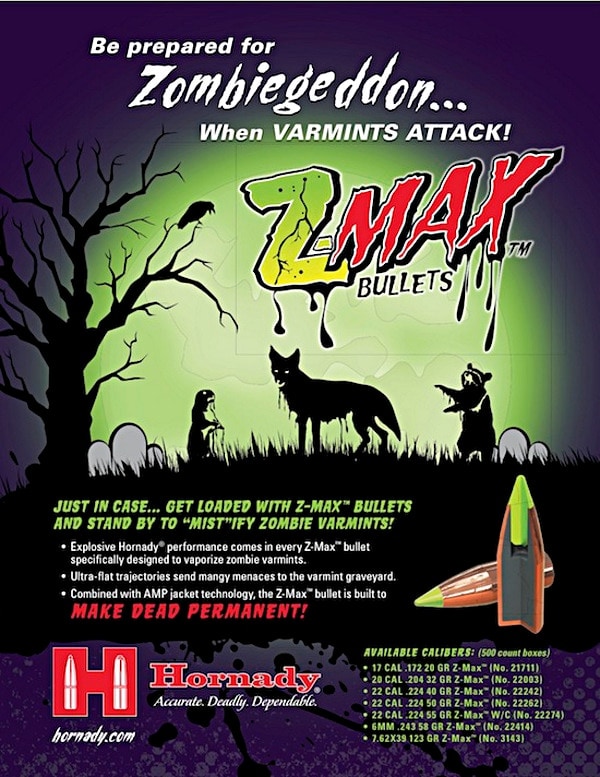 Now if you’re thinking to yourself, self, what’s so special about these bullets compared to the other polymer-tipped bullets with the exact same dimensions and bullet weights besides the polymer being bile-colored?  Bulk.  These only come in boxes of 500, unlike the others which can be purchased in boxes of 100.

Zombies are a metaphor for preparedness and being prepared means stocking up.  Plus, when you buy Z-Max bullets over their red-plastic-tipped counterparts, you save, like, 10%.  And reloaders are all about saving money.  Oh right, and quality control and precision and etc.

It can’t possibly be taking the whole zombie thing too far if it’s saving you money, or can it?