It’s been noted that in the middle 1800s there was a real groundswell of innovation when it came to firearm design. New methods of manufacturing, cheap resources and a growing demand for guns put gun makers in a position to think up unorthodox solutions to self defense.  LeMat’s “Grape Shot” Revolver could be the poster gun for this era of unconventionality.

As the name would imply, the LeMat revolver was invented by a LeMat—Dr. Jean Alexander Francois LeMat, a Parisian physician who lived in New Orleans. Even back then during a period where the look and concept of a gun was still being defined, to call the revolver unusual would have been an understatement. Oddly calibrated for .36 or .42 calibre cap and ball, black powder revolver loads, the LeMat’s most prominent feature was a 16 gauge smoothbore under-barrel. The shotgun barrel fired buckshot loads and could be loaded for nine shots at a time.

At close range, it was a killer. The original intent of the weapon was for cavalry in the U.S. Civil War after it earned the support of Commander James ‘Jeb’ Stuart and LeMat’s cousin, P.G.T. Beauregard, who recognized the value of the weapons features in battle.

LeMat began producing the weapon with the backing of Beauregard, who resigned his U.S. Army Commission to become a general in the Confederate Army. John Krider of Philadelphia manufactured the first models, but production had to be moved after the first run (and the start of the Civil War) so LeMat went overseas to Charles Frederic Girard and Son in Paris.

When the Civil War broke out LeMat received Confederate contracts to produce 5000 units with plans to manufacture offshore and then smuggle through the Union naval blockage due to the South’s lack of even rudimentary production facilities. The weapons produced in France were shipped to Briton to be smuggled past the naval blockade. By English law all guns were stamped with British proof markings which lead to the mistaken belief that the pistols that made it to the Confederacy were manufactured in England.  Only 2,500 revolvers made into Confederate Service and only about 2,900 LeMat Grapeshot Revolvers were produced from 1856 to 1865.

The weapon’s nine shot cylinder revolved around the separate central 16 gauge barrel.  A lever on the end of the hammer permitted the shooter to select the mode of fire and it was because of this ability that the LeMat had the potential to do some crazy things in combat. If the lever was flipped down the moveable striker fell upon the primer set directly under the hammer letting the 16 gauge explain your views to the person on the other end and all about ensuring a serious if not fatal wounding. If it was left in the upper position you found yourself armed with nine chambered rounds, each with about as much punch as a .380 ACP, while other revolver shooters most likely only had six rounds. 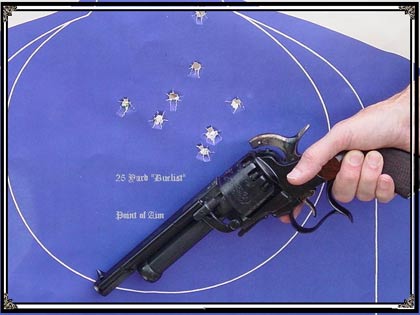 The theory behind the LeMat was ingenious but as so often happens, theory did not translate into practice. From the get-go, the gun suffered due to design flaws that were never fully corrected.  The guns primary weakness was its weight.  At five pounds fully loaded the revolver was incredibly unwieldy to carry, reload or even fire. The jointed ram rod needed to load the gun was a functional nightmare that could never have been done effectively in the heat of battle. Reloading was in fact so cumbersome with many early cap and ball revolvers that most cavalry officers carried several pistols on their person to avoid being swarmed in battle. Though I’m sure nine shots from a single revolver was attractive, carrying a second was unrealistic due to weight, especially when compared to the three pound, six-shot, Union fielded Colt 1860 Army model.

LeMat marketed the revolver as the primary sidearm for mounted Confederate troops and the design aspects reflect this cavalry influence. The an eyelet on the glossy walnut handles base fits a lanyard to prevent the weapon from being snatched away during the heat of battle.  The revolver saw service with the armed forces of the Confederate States of America from 1861-1865.

Because of the gun’s rarity, history and overall uniqueness and LeMat’s are considered to be quite the collectors item with originals starting at about $15,000 and heading up from there. Reproductions are made by Italian gun maker Pietta and go for about $825, and can be purchased through Cabela’s.