The Pack-Rifle is an interesting piece of kit; it’s a single-shot .22 Long Rifle take-down rifle that weighs 15.5 ounces, and the buttstock conceals a small fishing pole.  It’s safe to say that this is the sort of thing a person’s life could come to depend upon.  Also, it’s neato.

It makes the weight by going with construction that the aerospace industry would approve of.  The receiver is aluminum, with a handful of steel parts, including the pencil barrel, which is chrome-moly, chrome-lined steel.  It’s jacked with a carbon fiber sleeve for strength.

Putting things into perspective, the Pack-Rifle weighs the same as Browning’s 85%-scale all-aluminum 1911-22 or Ruger’s new polymer .22 LR LCR, and it’s not like either of those hides a rod and reel in the buttstock.

The Pack-Rifle has been in development for a few years now, and it used to be called the Pak-Rifle.  The disassembly/extraction features remains the same, although that extra c is what brought the fishing pole.

Some people say that the Pack-Rifle’s real weakness is the lack of both a safety and trigger guard.  But because this is a single-shot rifle that has to be manually cocked (and casings manually extracted), those features, to us, seem somewhat unnecessary.  Besides, this isn’t something to protect yourself in bear country, it’s for bagging food in extremely remote places and not much else. 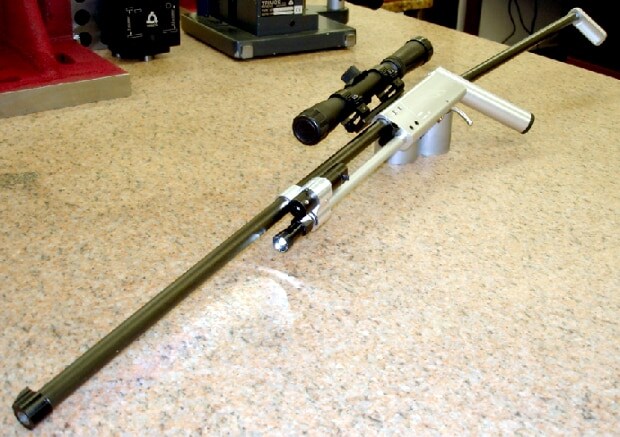 Pack-Rifle, the company, also makes accessories for the Pack-Rifle, the rifle-slash-fishing pole.  They make a scope mount and a laser/small flashlight mount, too.  All of which we can imagine come in handy, although they look pretty silly on this teeny rifle.

Priced at just over $400, it seems a bit on the spendy side, but it’s not like this survival tool has any real competition, and a design like this just isn’t cheap to make, even if it were mass-produced, which it isn’t.  Still, even at that price, they’re hard to find and Pack-Rifle can barely keep up with demand. 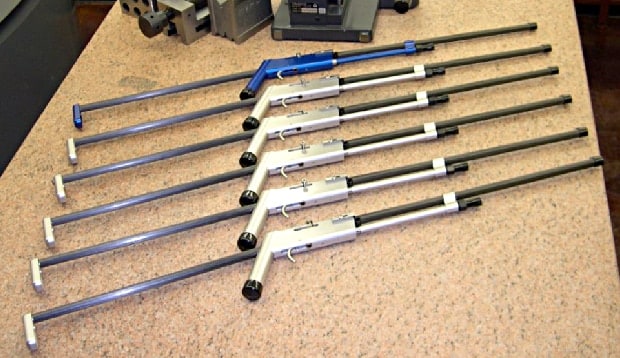