Don't Judge a Machine Gun by its Cover: the Owen Sub-machine gun

It took years before Lieutenant Evelyn Owen of the Australian army was able to convince his country’s military to adopt his 1940 design for a sub-machine gun and, with people being people, it’s really no surprise.

The gun looked weird and expecting a large shipment of British STEN guns, the Aussies almost went out of their way to ignore their unorthodox looking homegrown variant. When the British firearms never arrived (WWII meant there was an enormous need for the STENs back in England and on the European continent), the Australians were finally forced to take notice of the Owen, but still cautiously, particularly when it came to picking a caliber. They tried various designs for the weapon in four different calibers, before finally deciding on 9mm.

The Owen submachine guns’ (officially called the Owen Machine Carbine) most distinguishing feature is its upward facing, vertical magazine. This strange arrangement was chosen for no apparent reason other than it fed rounds very well. Post caliber trials, the weapon was adopted into the Australian military without any further delays and, as a matter of fact, variants of the weapon were still in service up until the mid 1960s with examples of Owen submachine guns showing up on battlefields in Vietnam. 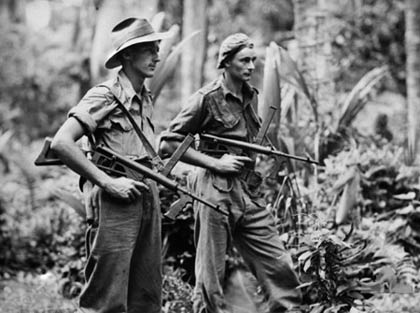 And during this period, from World War II to Vietnam, production increased and design changes were introduced to newer models. The early fins around the barrel were removed and changes were made to the butt.  Throughout their production history, Owens featured buttstocks with folding wire-framed butts, the standard all-wood version, and one version that was half wood with the remainder made up of a metal skeleton stock.

Another feature that was unique to the Owen was its quick-change barrel—but why they incorporated this feature into the weapon system is not entirely clear.  The gun was only ever manufactured in 9x19mm Parabellum so the ability to change barrels was not to accommodate caliber changes.  Also, it would have taken many thousands of rounds fired at a constant through any one particular barrel for it to became too hot to be used.  Still, the ability to swap out barrels while in the field wasn’t a “bad” thing.

Once in service with the Australian military, machine gunners oftentimes painted their Owens in varying camouflage paint schemes—adding an extra layer of uniqueness to the Owens’ already distinct appearance.  Today you can see some pretty unusual patterns, reflecting the tastes of the individual soldier—always something Guns.com finds interesting.

So, looks aside, how did the gun nobody wanted to touch perform in the field?  Well, admirably.

Users found the Owen sub-machinegun to be ideal for cutting through the jungle terrain in New Guinea during close quarter combat with the Japanese and, again, in Vietnam against the Viet Cong and elements of the North Vietnamese Army. The weapon was a little heavier than most other comparable types, but its forward-mounted grip and the standard pistol grip made it extremely stable, easy to handle and pretty darn accurate.

The top mounted magazine required that the sights had to be offset to the right slightly, but that didn’t impact anything too much as the Owen was most often fired from the hip. The actual production for the weapon ceased in 1945 at the end of the war, but in 1952 most were rebuilt and re-tooled with some having the provision for bayonet attachments.  Flash forward to 2004, when authorities raided an “underground weapons factory” in Melbourne Australia.  What guns were they making?  Silenced copies of Owen’s submachine guns probably for sale to gangs. 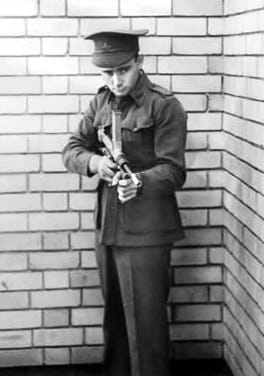 The weapon’s overall length was right at 32 inches with its standard barrel, and that barrel was 9.84 inches in length. It weighed 10.6 pounds without the magazine. The magazine held 33 9mm rounds. Its cyclic rate of fire was 700 rounds per minute, and it had a muzzle velocity of right at 1,380 feet per second.

The Owen submachine gun is a good reminder that warriors world round do well to keep an open mind when it comes to weapons.  As the saying goes, you can’t always judge a book by its cover.  What are some guns you think are “ugly” but extremely effective in the field?