The Wonderful World of Wadcutters: Why the Full Wadcutter is for More than just Target Practice

To those outside of the target shooting community, the full wadcutter bullet—those stumpy little things that look like a miniature trash cans—are too often viewed as little  more than a waste of lead and time.  There are however more uses for them than you might think and reloaders and shooters will do themselves a favor to give these crude looking projectiles a second look.

So what is a full wadcutter? The full wadcutter has a meplat that is completely flush and is the same width as the rest of the bullet. This allows it to punch a perfectly round hole in the paper target which makes them ideal for target shooting. The hollow base of the wadcutter allows it to get a good seal on the rifling and stabilize the bullet.

Many people think that the wadcutter was just for revolvers but there was the legendary Smith & Wesson Model 52 in .38 Special.  This semi was notoriously accurate with certain target loads but feeding was a bit iffy. 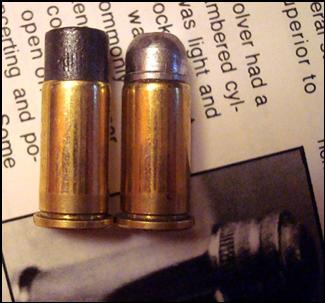 The most popular caliber that you will find wadcutters for is the .38 Special, and it is a 148-grain load that the factory advertises at about 770 fps. I can’t tell you how often I find these old bullets lying around gun shops, often on sale at practically give away prices, and it is not uncommon to see them there for months and even years until they get picked up by the occasional target shooter or someone who buys them to melt them down into something else.

To me, that just doesn’t seem right.  Is the wadcutter to be forever relegated to just paper punching? Surely there has to be more to its life than just the range but can it ever escape its reputation of being useless except for making round holes? It sure can—you just have to think outside the box.

The full wadcutter makes a downright dandy small game bullet in a .38 Special.  For all practical purposes, when considering just what a bullet will do upon impact, one really only needs to think in the broadest of terms (as we do here) and much of that rests on the meplat.  The standard handgun hunting bullets are measured by the diameter of the meplat and one school of thought is that the wider the meplat, the nastier the thwack of the bullet. Well, there isn’t a bullet out there that has a wider meplat than a full wadcutter. 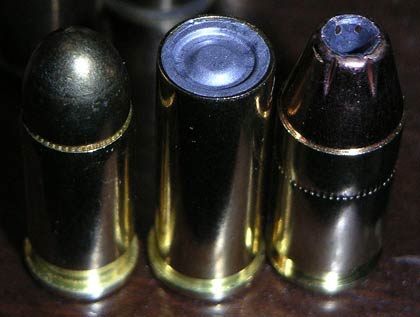 Game like grouse, rabbits and even fox and coyotes can be easily taken with a decent .38 Special sighted in with the chunky little lead slug. Since most lead bullets tend to just pass in and right out of small game unless they whack bone, the full wadcutter will do the same damage as any other round and possibly deliver a more resounding impact to the target.

So what about the full wadcutter for personal defense? While it is certainly not the best idea in the world, there are worse bullets. Most lead wadcutters are cast of softer lead, but if they were made from wheel weights they would be less likely to mushroom and provide better penetration. I would much rather use a decent semi wadcutter or a hollow point any day of the week versus a full wadcutter, but it is better than nothing and up close and personal, let’s face it, nothing really matters.

So the next time you see a dusty old bunch of wadcutters lying around a shop and have a .38 Special that needs a good work out, pick them up and load them, you will be surprised with the right powder how accurate one can be.