On Jan. 1, 2011, Iowa went from a ‘May-Issue’ state to a ‘Shall-Issue’ state.  That is, the discretionary power regarding the issuance of concealed weapons permits was pulled from county sheriffs and placed into the hands of state legislators who created a standardized Iowan CCW issuance.

So, starting on the first of last year, all law-abiding citizens who applied for a CCW permit were granted one, provided they met the state’s requirements.

Now the numbers are in and the results are what one from the gun community might expect, “Iowans seeking permits to carry handguns and other weapons has increased 170 percent during the first 11 months of 2011,” according to the Des Moines Register.

A total of 94,516 Iowans sought and received CCW permits from Jan. through Nov. of last year (2011), the Iowa Department of Public Safety reported.

And data from the state’s three most populous counties – Polk, Linn, and Scott – show an even bigger surge in the number of CCW permits granted.  In those counties, issuance is up 271 percent from 2010.

“It’s unbelievable,” Pals added. “It hasn’t slowed. The permits used to be one-year permits. Now they are good for five years.” 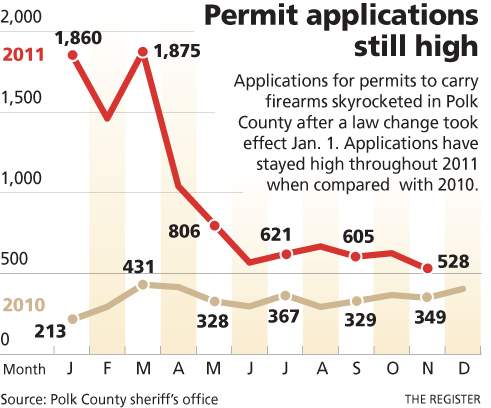 Scott County Sheriff Dennis Conard, who has seen a 570 percent increase in permits, also weighed in on the surge in CCW permits.  He noted that there have been few problems despite more Iowans having handgun permits.

He believes that people who qualify for a permit are not likely to cause trouble.

“I didn’t expect any problems with the people who qualify, with the gun law or anything else,” Conard told the Des Moines Register.

Andrew Arulanandam, a spokesman for the National Rifle Association, told the Register that personal safety is an issue of nationwide concern.

“This is not the case just in Iowa. This is across the country,” Arulanandam said. “People are placing a higher premium on safety.”