With mind blowing super weapons like 10 megajoule Railguns and 1.5 mile capable sniper rifles added to our collective arsenal each year, it’s easy to forget that at one time and not really that long ago, even the crudest of firearms in and of themselves were new and novel concepts and only beginning to reveal to the world (and visionary leaders) their true game changing potential as defense and military weapons.

Coming out of the age of sword and shield, a prime example was the Great Turkish Bombard (later called the Dardanelles gun), which you can be seen today on view at the British Royal Armouries in Fareham, England. 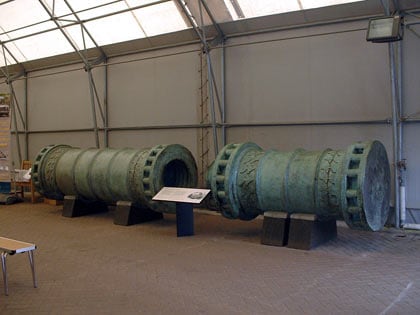 The bombard is quite possibly the most significant gun in human history both for what it actually accomplished, and what it could have done: the bombard knocked down the walls of Constantinople in 1453 allowing Ottoman Turks to pour into the city they would later rename Istanbul and depose the Black Sea trading hubs’ Christian rulers. This ended not only what was called the “Byzantine Empire,” but also the eastern half of the Roman Empire, which dated its roots back a thousand years to Augustus Caesar.

The introduction of the bombard onto Dark Age battlefields also hastened the end of European feudalism, as seemingly overnight, gunpowder rendered the idea of sheltering safely behind the walls of a 100-year old castle obsolete. Some historians today cite the fall of Constantinople as the end of the brutish Middle Ages and the beginning of the Renaissance.  All of this was only made possible because of a gun. 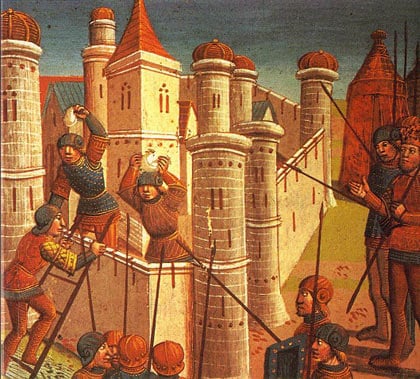 Shaped like an oversized segment of sewer pipe, the 630mm caliber, 5182 mm long barrel is sectional with the two component pieces weighing roughly 16-tons when complete.  These sections screw together with giant threads “like an Englishman’s pistol” as one 19th century account put it, and allow the unwieldy super cannon to be dismantled and transported by wagon or ship, then reassembled on the battlefield.

From the beginning, bombards were identified as powerful siege weapons and, as such, early artillerymen needed to plan out prior to the fighting precisely where along an enemy fortification was the best spot to set up shop.  This was because there was no way to elevate or otherwise aim the gun once it was assembled.  Operators would simply set up in front of a city wall, fill the device with gunpowder, light the fuse, run for cover and hope for the best.

Explosions from bombards of this era were reportedly raw, unbridled, at times unpredictable and always enormous. The pieces were cast out of bronze and could hurl huge stone cannon balls weighing up to 1,500 pounds several miles.  After one shot, the barrel was cooled with oil in order for it to be fired again.  This cooling process took about an hour and was considered too slow even in 1450. 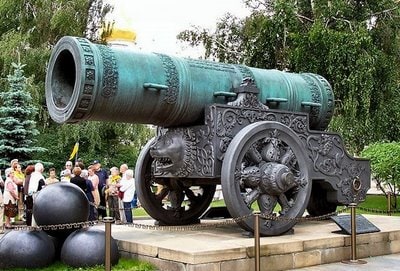 Despite being crude, bombards were effective. Though early in the battle, the Byzantines could repair their city walls almost as fast as the Ottoman’s could shoot and reload their guns, by the end of the 53-day siege several of the Turks Bombards had reduced sections of Constantinople’s walls to rubble.

Much of the credit for the development of this piece of artillery rightfully goes to the young Turkish military hero who both commissioned its creation and sacked Constaninople—Mehmed II or Mehmed the Conqueror. By any account, a brilliant Turkish tactician and resourceful and imaginative leader, Mehmed thoroughly recognized the potential of Western military hardware, specifically artillery (cannons made their debut in Western Europe soon after 1400).

Looking to incorporate this technology into his growing army, the young Sultan sought out famed Wallachian (Hungarian) “gunfounder”, Urban (or sometimes spelled Orban) to fashion for him the most powerful cannon the world had ever seen after realizing that a frontal attack against the supposedly impregnable walls of Constantinople would decimate his Ottoman Army. 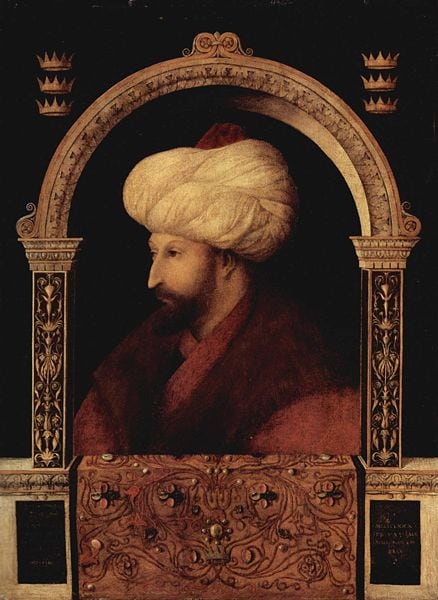 After Constantinople fell, the remainder of Western Europe appeared ripe for conquest, and had it not been for Mehmed’s death in 1481, we might all be speaking Arabic today. Part of the Sultan’s legacy was most definitely incorporating firearms into the Ottoman Army—a decision that would allow them to conquer much of the Muslim world.  The Turks continued to use bombards made in the 1500s through the Crimean war and up until 1807.  In 1866, Turkey presented Queen Victoria with a Dardanelles gun, designed by Urban’s Turkish successor, Munir Ali (some researchers believe that Urban was killed along with an entire artillery crew during the siege of Constantinople when one of his own guns exploded) which was on display for many years at the Tower of London.

Nicholas Hall, Keeper of Artillery at the Royal Armouries, said the example on display at his museum was built after the actual siege of Constantinople.  He also believes the siege guns at Constantinople did not screw together like this example. 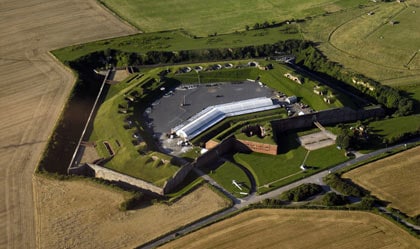 “However, this gun was made for the same Mehmed II who was clearly an artillery enthusiast and is the same sort of caliber as those deployed in the great siege,” he said.

The guns that participated in the actual siege are apparently lost.

The Ottoman Army, deprived of their brilliant tactical innovator, ended further attempts to expand Turkish conquest into Italy and Western Europe. Ironically, the countries of Western Europe displayed no great love for the former Byzantine Empire and accepted its demise, distractedly.

The conquest, instead of acting as the death knell in “Roman” rule, led to a cultural Renaissance in Europe and the growth of its military power, as well as the Age of Exploration of the 15th and 16th centuries. Europeans turned to the seas to seek trade instead of the previous routes overland through Arabia—and the rest, as they say is history.