Which is better for concealed carry? .380 or 9mm

I’ve got to start by saying I don’t think there is an answer to this question, but I’m going to explore it anyhow. I’ve heard too much banter about which one is better. Almost all of these conversations are centered on an unspoken presumption that the ballistics of these respective bullets is all that matters.

It is as if we had ourselves a Thompson Contender # 1842 frame, like Guns.com writer Jim Downey and the fine gentlemen at Ballistics by the Inch, and we just had to decide which barrel to screw on that day—a three inch .380 or a three inch 9mm.

Let’s look at what their data would say about those choices. (Hang on to your hats, folks, an English major is about to attempt some math.) 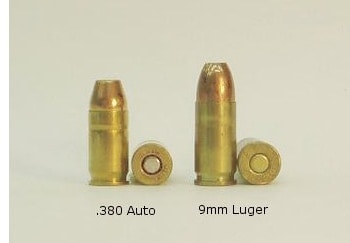 The best average performance from the .380 rounds at three inches?

The best average performance for a 9mm at three inches?

But who wants to carry a Thompson Contender?

Before I get too deep into this, let’s make two assumptions.

You probably have your favorite compact or subcompact pistol already in mind. I may not mention them. Nothing personal. There are some pistols that I could pick up in the dark and still tell you the brand and caliber. I could even give you a run-down of their mechanics. There are some that I can hardly tell apart at all, even by the light of day.

Some pistols, for example, the LCP and the LC9 stem from the same idea, but they are vastly different. When the caliber changes for a concealed carry gun, more often than not, the features and specs change too.

I have my brand loyalties, but most of my preferences are based on performance and features. Here are the things that I think merit some consideration.

Power – When we’re just looking at ballistics, the 9mm will win, but few companies make a 9mm and a .380 that are equal in all other ways. Ruger and Kel-Tec, though, come close.

While one caliber is more powerful, both are effective.

Concealability – How big is too big? Whenever you chose a defensive, concealable weapon, you make certain sacrifices, but how small does a gun have to be? The old Colt Vest-pocket .25s are very concealable. In an attempt to keep this argument clean, I’m leaving out many smaller rounds—rounds that have proven lethality. I’m also leaving out larger caliber guns, even when they are smallish (like the .40 and the .45).

While one is more easily concealed (as there is less to conceal), both are concealable.

Action – Are you more comfortable with a double action only? Would you trust your reflexes and training with a single action only? How about something that does both?

External safety – I don’t want an external safety on a concealed carry weapon. While I train regularly and shoot a lot, I have difficulty guessing how I might react when taken completely by surprise. Will I remember to deactivate a safety before I’ve squeezed the trigger and nothing has happened? The only way to know is to test it—and I don’t want to do that.

Many people consider the heavy trigger pull on some of these guns to be a safety. Not really. You can still shoot yourself if you grab the gun incorrectly on the draw.

Others prefer the added security of internal and external safeguards. Though this is a heated debate, it is one centered in opinion.

Performance – At what distance would you expect to confront an adversary? Some guns (and ammunition, too) are not reliably accurate from any distance. Others are surprisingly accurate. I shot very well with the Kahr P380. The Beretta Nano also.

How rapidly will you fire the gun? For me, this is a big determining factor. I really like the way the Ruger LC9 looks and feels. And my first shots are on target. I still haven’t gotten good at rapid fire target acquisition because the LC9 jumps. This is where a .380 may have the edge. While a 9mm has more power, that power may be wasted if you don’t hit the target.

Grip – This is closely related to performance, and a determining factor for many shooters’ problems. As the grip size increases, the concealability disappears. My J frame S&W revolver has fat rubber grips with textured finger grooves for three fingers and I’ve had to learn to carry it in ways that compensate for this potentially fatal flaw.

But I’ll say this—I expected to like guns that allowed for a full grip more than their competition with shortened grips. They feel better, but the extra grip doesn’t always mean that I shoot better. I shot the Nano and the LC9 side-by-side and did much better with the shorter Nano.

Other things to consider – Some carry pistols have many holstering options. Newer designs don’t—simply because holsters have to be made. Some have incredible sights, adjustable sights, available laser sights, and/or light options. Some incorporate aesthetics into the design (like the Kimber Solo). Some guns won’t fire without a magazine. Some will.

I knew I wasn’t going to settle this debate. The only way to do so would be to make all things equal except the caliber. While the pocket nines are getting smaller, the .380 loads are getting better.

And too much depends on the shooter. I’m a big guy. I’m just a shade under 6’4” and I weigh in close to 230 pounds. In the winter, I can comfortably conceal almost any handgun. So that takes size out of the equation for me, which would suggest that I would choose a 9mm (or a short barreled .45). I owned a Kel-Tec P11 for a while, but opted to carry a .357 revolver. Now that I’ve lived with the Nano for a while, the revolver is back in the safe.

I keep expecting Walther to make a PPK in 9mm. The .380 PPK seems overbuilt. The same could be said for the new Colt Mustang, which I am still waiting to test-drive. I’d like to see Kimber make an even smaller, thinner .380 Solo—a true pocket pistol.

Lately I’ve been carrying the male equivalent of a purse gun—what I’ve heard some refer to as off-body-carry. This has its own set of considerations, including ease of access and how to secure such a pistol. But I digress.

A well placed shot with a .380 will be effective. An erratically emptied 9mm might scare the hell out of an adversary (which may or may not be good enough). I guess for me the ultimate decision makers are ease of use, reliability, and my training.

I know I enjoy a certain privilege. I get to test out pretty much anything I want—and often before the guns hit the market, but I’m always looking for that perfect combination of features—I’m still on the hunt for the perfect pocket pistol. Perfect for me, at least.

I will choose a gun that I can use confidently from as far away as 25 feet (six shots in an eight-inch circle). I want a gun that performs well under rapid-fire scenarios. I want a gun that is easy to conceal and easy to train with. I want it to look good and fire without its magazine in place. I want as much power as I can get in a gun that is roughly six-inches by four and one-inch thick—give or take. I don’t want anything on the outside of the gun that might snag anything. I don’t want any external safeties, and if I have to have one, I want it to function like a 1911 thumb safety (down means good to go). And I want a full lifetime warranty. I want it to be at least a .380.

Not too much to ask for. I’ll let you know if I ever get around to making a decision.