Five of the Dumbest Movie Guns Ever

Everyone has their favorite movie but most gun people also have their favorite movie gun, whether it’s Dirty Harry’s Smith & Wesson Model 29, the Winchester 97 from The Mummy, or the Sharps rifle from Quigley Down Under.  But what about the movie guns that are so over the top, used so egregiously outside the realm of any guns real world capabilities, that they make you cringe?

Fantastic storylines don’t excuse firearm apathy and believe me there are some real stinkers out there, so here’s a roll call of guns that no one but a stoner Hollywood screenwriter could come up with: 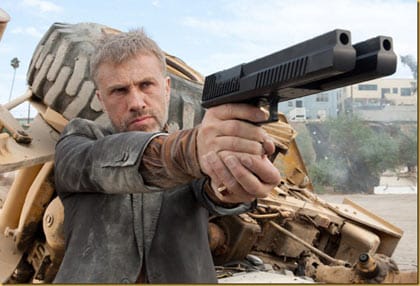 The side-by-side Desert Eagle from the recent movie, The Green Hornet, is one major Hollywood gaffe, but that usually goes without saying whenever you see “Desert Eagle” and “movie” in the same sentence. I mean, from where I’m sitting, the entire flick is one big farce technically but seeing two complete Desert Eagle pistols built into one grip (a perfectly good Beretta 92, as it turns out) was truly laughable. Set aside the fact that the recoil off of two offset .50 caliber barrels would be absolutely bananas, how does one aim such a thing? What holster would fit it or, better yet, how would you even effectively carry it? Better still, just why?

I think my sentiments about this ridiculous, two-headed monster can best be summed up in a line from another movie, In Bruges (a film that for its own part, does a nice job accurately depicting firearms). After an arms dealer offers to sell him a tricked out Uzi, Ralph Fiennes barks back, “I just want a normal gun for a normal person.” 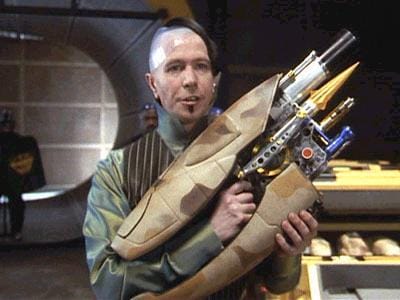 The ZF-1 that was brought out to wow alien mercenaries in The Fifth Element almost made me fall off the couch the first time I saw it. I mean how can a gun “do everything”, and ludicrously do absolutely nothing at the same time. This gun even has its own self-destruct button.  I kind of wish someone making the movie would have pressed that early in the film’s production. 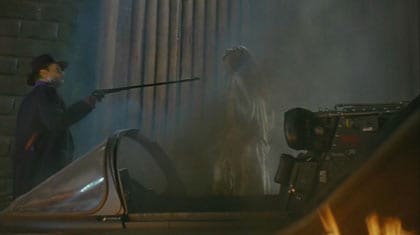 Yeah, even the classics aren’t exempt from gun guffaws—in fact they can be some of the most heinous perpetrators.  The 21-inch barreled Smith & Wesson Model 15 used by Jack Nicholson’s Joker in Batman to take down the Batplane has to make up one of the dumbest gun scenes ever filmed and perhaps the crowning example of Hollywood at its worst when it comes to a lack of firearm realism/knowledge, simply because it could have a been an easy fix and Tim Burton should have known better.

I can just imagine a whole team of writers patting one another on the backs over how awesome this scene was gonna be:  Guys we did it. All of batman’s gadgets will miss the Joker and then the he’ll take down the Batwing with this funny looking gun.  That’s something the Joker would do, right.  It’s funny, right?

Well, I did find it pretty funny, but most likely not for the reason the writer’s were hoping for.  Granted, there is some precedent here: a Colt M1911 famously took down a Japanese Zero Fighter in 1943. But that was a .45 ACP, shot through an open cockpit by pilot floating at an altitude of about 5,000 ft from a parachute.  Instead I’m expected to believe rockets, machine gunfire and a highly-armored custom built airplane can be outdone by a single shot from of all rounds a .38 special fired from the ground?  Holy Hard to Swallow, Batman I think you should have sprang for a better technical advisor.

4.  The Lawgiver in Judge Dredd 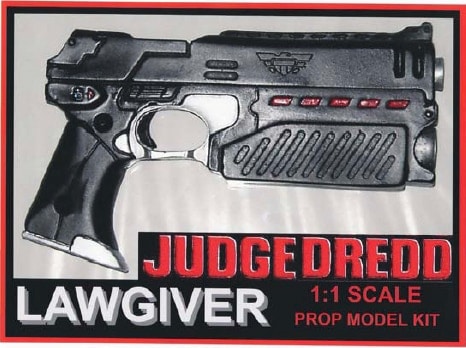 In the same vein as the ZF-1, the Lawgiver in the hands of Judge Dredd represents another Sci-fi movie prop gone way overboard only it also holds the distinction of having the worst name for a movie gun ever.  The gun gives laws?  I mean I get where they were going with it, the gun “delivers justice”, but the name’s so clunky it doesn’t really seem to add up to that any way you calculate it.

The gun only works in the hands of its specific owner, which is actually fast becoming a reality for some gun and bracelet systems, so I have to give it points for that. But once we start running down the list of everything this pistol can do, we wander out of prophesies and into fairy tales.

The lawgiver supposedly can fire a standard bullet, heat seeking bullets, Ricochet bullets, incendiary bullets, armour piercing bullets, explosive bullets, tear gas, and grenades and all in various stages of automatic fire.  Oh, and it has a range of up to 3-miles!

Watching Sylvester Stallone (who looks ridiculous holding a gun to me because he’s long been a gun control advocate) hit two opponents with a single shot despite the fact that they were standing feet apart just iced the cake for me that some in Hollywood have more imagination than common sense.

In my humble opinion, the all out dumbest firearm used in any movie has to be the M203 prosthetic leg gun used by Rose McGowan in Planet Terror. If you’re looking for a total disconnect from reality, stop looking because you just found it and you don’t have to look any deeper than the obvious: how does she fire the gun?

Not only does McGowan fire the weapon with her fingers nowhere remotely near the trigger, she somehow switches between machine gun and a grenade launcher mode, apparently just with the will of her mind.  And let’s not forget that the gun is mounted on her freshly amputated leg, yet somehow this doesn’t seem to really phase her nor does she need months and months of physical therapy to learn how to walk on this thing.

I will give the director, Mr. Rodriguez, this though: he covered his tracks pretty well by purposely cutting out sections of the film to mimic projector malfunctions characteristic of the experience you may have had back in 70s when the projectionist messed up the film change and the movie suddenly skipped over a section.  Accordingly, I guess we’re suppose to assume that a scene explaining the function of the gun was in one of these “lost” portions of the movie so we’ll just have to take it’s legitimacy on faith. 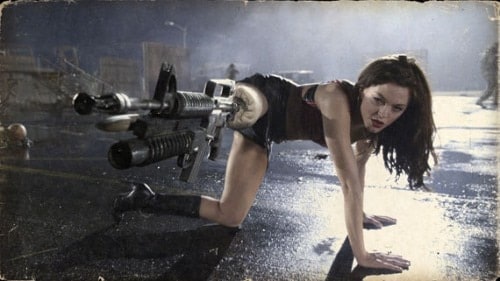 Well, you know what?  I’m not buying it. You don’t feature a gun like this, make it integral to the plot and use images of it in almost all your promo material without making an explanation on how it works readily available. It’s a question folks are going to ask and not providing a real answer is just sloppy writing.

And that aside, I question how much it adds to the film. Even though they’re ridiculous, at least the ZF-1 or the Lawgiver look cool; the peg leg M203 and Planet Terror in general were just gross to me.

Hollywood does not have a good track record when it comes to realistically portraying firearms and I’d go so far as to say that, with the exception of only a handful of flicks, in most guns in movies perform fair greater feats than they are actually capable of.  And with a public hungry for action and an escape from reality, this seems to be working for them, so I’m pretty sure as long as they’re making movies we can look forward to more gems of firearm fallacies.

As long as folks are telling each stories, they’ll be making up fictitious guns. What do you think was the stupidest gun ever featured in a movie, television program or other work of fiction?