He was known by many names, William Henry McCarty, William H. Bonney, but he was best known as Billy the Kid. Born in New York City, this young man would later find infamy in the old west as a hired gun, outlaw, and otherwise stone cold killer.

In 1877 at the age of eighteen after the death of his mother, Billy found himself drifting around Lincoln County, New Mexico until he landed legitimate work with Josiah “Doc” Scurlock and Charlie Bowdre. Later he went to work for rancher and, more crucially, powerful merchant, John Tunstall. In 1878, a posse deputized by Lincoln County Sheriff  William Brady murdered Tunstall, igniting the Lincoln County War (an old West conflict between the newly arrived Tunstall interests and the long established LG Murphy Co. largely over control of the lucrative mercantile trade in New Mexico).  Billy the Kid and his friends soon found themselves swept up in the campaign and Billy was directly involved in both the killing of William Brady and the largest engagement of the war, the Battle of Lincoln—which left him a fugitive of justice.

And it was during this time period—the next year and a half after the fighting in New Mexico—that Billy the Kid’s legend grew as did the reward for catching him.  A certifiable outlaw, he survived by stealing cows, gambling, and just hiding out in cow towns throughout the Western United States. A wanted man, Billy was forced to live a clandestine lifestyle, yet, as we see even with the criminally inclined today, outlaws often can’t resist making an appearance. 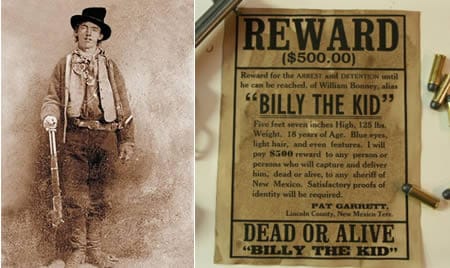 On January 10, 1880 Billy the Kid was in Bob Hargrove’s saloon in Fort Sumner, New Mexico.  In his party were Jim Chisum and three other cowboys. Also in the saloon at the time was a man by the name of Joe Grant, also known as Texas Red. Grant had gotten into a bit of a discussion with Billy before betting the outlaw $25 that he would kill a man first. Grant (who was drunk and working on getting even drunker) then walked over to one of Chisum’s cowboys, pulled the man’s ivory handled revolver out of its holster and swapped the gun for his own revolver.

The cowboy said nothing and he was probably scared of Grant, whose reputation preceded him.  It became clear however to everyone in the saloon that Billy would not stand for the insult.

Billy walked over to Grant and “admired” his new revolver, pulling it out of Grant’s holster and looking at it in the light.  Billy, having ridden with the four cowboys, knew something about this gun that Grant did not, which was that Chisum’s cowboy had previously touched off three rounds from the sixgun but had not reloaded it prior to coming into the saloon. While Grant was not paying attention Billy rotated the cylinder so that the hammer would come down on an empty chamber and put Grant’s gun back in his holster. 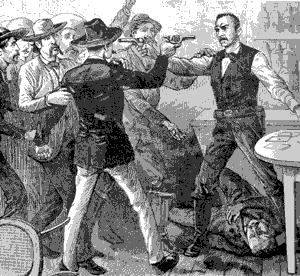 Billy and Grant eventually had words and according to witnesses, Billy tried to walk away. Grant pulled on Billy the Kid and instead of hearing a bang the only sound across the saloon was a click of a hammer against a dead primer.  Billy turned and drew, firing three shots.  A round hit Joe Grant in the head and killed him instantly. Grant lay dead on the floor and was later buried in the military cemetery with little effort or fanfare. When Billy the Kid was asked about killing Grant he replied that it was “a game of two and I got there first.”

It was stories like this—stories that featured, resourcefulness, craftiness and the willingness to dish out violence—that drove Billy the Kid’s rising star and fueled his career as an outlaw. After the shooting of Grant, lawmen placed him in Lincoln jail.  He escaped, killing deputy James Bell and Bob Ollinger in the process. For over a year he stayed on the run but, as is often the case with outlaws, couldn’t resist drifting back to Fort Sumner. On July 14, 1881 Pat Garrett was waiting for him and in the dark he shot Billy the Kid dead.  His legend and name live on today.

By many accounts, Joe Grant wanted to be famous, too. In the end he was, but only for being on the wrong end of Billy the Kid’s revolver.