Magnum Research, a Kahr company, has been busy working on an accuratized .22 Long Rifle automatic carbine.  What may surprise people is that it’s based on the Ruger 10/22.  Loosely, in any case.  The Magnum Lite MLR22AT goes all-out blending the tried-and-true with the cutting edge.

Like the other Magnum Lite rifles, the gun uses a Ruger-patterned receiver, modified with a risen scope mount, as well as a Ruger-compatible trigger and magazine system, for aftermarket compatibility.  While the bolt and barrel are also compatible with the 10/22, those are the wildly custom parts.

The bolt is competition-ready, cut to a level of precision other 10/22 parts just can’t be, not for mass production.  The barrel, too, is totally different.  Built around a thin steel center, Benz target chamber, and recessed, crowned end cap, the external body of the barrel is largely a carbon fiber composite, which is both lighter and stiffer than steel.  It also has better heat conduction, leading to little if any change in point-of-impact.

This Magnum Lite differs from the others with its matte black receiver and free-floating black synthetic thumbhole stock, with a rubber buttplate.  We expect the sound of the gun to produce more perceived recoil than the actual recoil itself. 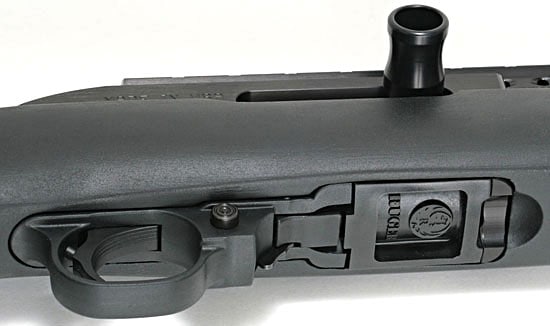 With a 17-inch bull barrel, enlarged charging handle, and everything else, the MLR22AT weigh a scant 4¼ pounds.  With an MSRP of $562, we expect the retail price to be below $450, which is far less than what you would spend customizing a 10/22 to match.  About the only thing to knock this gun on is that it doesn’t have any iron sights, nor is it suppressor-ready.  It is, however, ready for about any competition you can bring it to. 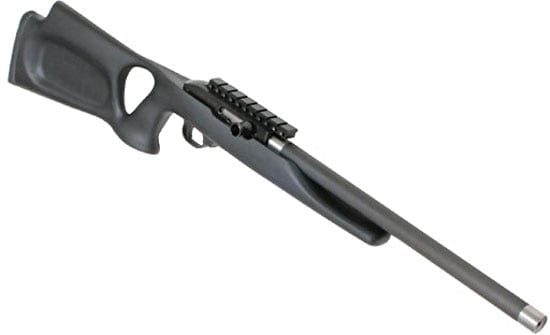 If you were telling yourself not to get a 10/22, despite everyone telling you otherwise, because it wasn’t accurate or competition-worthy enough, well, now you don’t have any excuse.  Magnum Research fixed that for you.