On Wednesday, 15-year-old Jaime Gonzalez brought a pellet gun to his middle school in Brownsville, Texas.

After punching one of his fellow students in the nose for unknown reasons, Gonzalez walked down the main hall of Cummings Middle School with the pellet gun partially concealed in his clothes.

An administrator saw the pellet gun and immediately called 911.  The school was then placed on lockdown and police arrived in a matter of minutes.

What police saw when they arrived on the scene was not a eighth grader holding a pellet gun, but “a male, about 5 foot 7, holding a black handgun in a hallway,” according to police radio records obtained by the Brownsville Herald.

Police told Gonzalez to put down the weapon several times; he refused and began pointing the pellet gun at police officers.  The officers were forced to make a decision:

“Take him out,” a policeman yells, according to the radio records.

“Subject shot,” an officer repeats on the radio call.

Gonzalez was shot three times, twice in the chest and once in the back of the head.  Later, he was pronounced dead at Valley Baptist Medical Center in Brownsville.  No one else was injured.

“Why was so much excess force used on a minor?” the boy’s father, Jaime Gonzalez Sr., asked. “Three shots. Why not one that would bring him down?”

What happened was an injustice,” his mother Noralva Gonzalez said. “I know that my son wasn’t perfect, but he was a great kid.”

But interim Police Chief Orlando Rodriguez maintains that Gonzalez was brandishing what appeared to be a handgun and “had plenty of opportunities to lower the gun and listen to the officers’ orders, and he didn’t want to.” 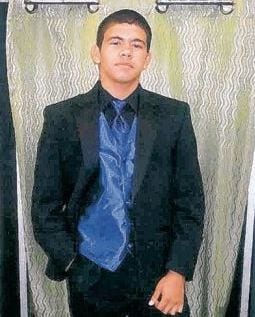 The teen’s godmother, Norma Navarro, told the Herald he was a kind person and a good student.

“He looked like a big boy, a man, but he was a child. He was innocent,” Navarro said. “He wasn’t going to hurt anybody, I can assure you. He would have never hurt anybody. I want those parents to know, don’t judge him if you don’t know him.”

“He did music. He worked well with everybody. Just something unfortunately happened today that caused his behavior to go the way it went. So I don’t know,” he said.

And Gonzalez Sr. said he had no idea where his son got the gun or why he brought it to school, adding, “We wouldn’t give him a gift like that.”