California Police Officers Own 7,600 Assault Weapons: What Are They Used For?

Back in November of 2011, Guns.com reported on an ongoing federal probe conducted by the Bureau of Alcohol, Tobacco, Firearms and Explosives looking into whether peace officers in three Sacramento-area law enforcement agencies sold banned and/or illegal firearms to the public.

As mentioned in that article, California law permits police officers to buy certain handguns, high-capacity magazines, and assault rifles that are not available to the general public provided they show their credentials, register the firearm with the Justice Department, and have permission from their police chiefs.

Thus far, no charges have been filed as part of the ATF investigation.  However, the probe has prompted state and local lawmakers to revisit the 2001 police purchase exemption to evaluate what purposes these officers are buying assault weapons for, i.e. “Are police officers using them for on-duty purposes?” “Off-duty purposes?”  “Should officers even be allowed to buy them?”

“I think it’s much more questionable whether we should allow peace officers to have access to weapons or firearms that a private citizen wouldn’t have access to if the use is strictly personal,” Assemblyman Roger Dickinson, a Democrat who
represents the Sacramento region, told the Associated Press.

It should be noted that the police purchase exemption allows the more than 87,000 peace officers in California to buy assault weapons “for law enforcement purposes, whether on or off duty.”  And last year, the state attorney general provided additional clarification, stating that the officers can acquire publicly banned guns for any purpose, provided they give them up when they retire. 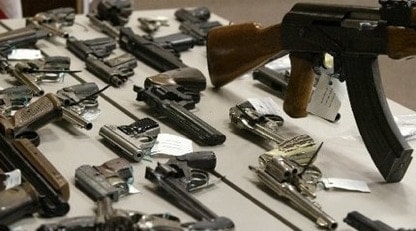 The AP followed up with several police departments and found that different departments and state agencies interpret the law differently.  Some departments permit officers to use firearms they’ve purchased for personal use while other departments mandate that the guns must only be used for police purposes.

The Los Angeles Police Department represents the latter.  The policy is clear: guns must only be used for police purposes.  According to statistics obtained by the AP, via the California Public Records Act, about 1,300 of the nearly 10,000 LAPD officers have assault rifles, more than 500 of which were purchased by individual officers.

“We’re not interested in loading up people’s gun closets with assault weapons,” Cmdr. Andrew Smith, who spent $1,200 on his gun, told the AP. “The idea is that these guys would be able to have these in the trunks of their police cars if they’re needed.”

The Justice Department, which has been tracking the purchase of assault weapons bought by law enforcement officers in California since 2001, stated that approximately 7,625 assault weapons have been registered over the last decade, with some officers buying more than one weapon.  And for the first 11 months of 2011, 844 officers bought 861 weapons, according to DOJ figures.

This information has led some to question the utility of the policy altogether.

“I do not believe the police officers should be able to buy them personally anymore,” City Councilwoman Jan Brunner told the AP. “Particularly after everything that has happened in Oakland [referring to the supposed maltreatment of occupy protesters], we need to make sure our officers are following protocol.”

And the spokesman for the state Department of Fish and Game, an agency that allows officers to buy assault weapons and use them off-duty, also voiced skepticism about what purposes the guns fill.

Just six other states and the District of Columbia restrict ownership of assault weapons, all with exemptions for law enforcement officers. Connecticut, Maryland and Massachusetts require that officers possess the weapons only while performing official duties. The other 43 states permit civilian ownership of assault weapons, although Minnesota and Virginia ban them for those under age 18, the AP reported.