How to Shoot (on the Move) (VIDEO)

No matter how you cut it, shooting while moving is something every tactical guy or gal needs to have in their tactical toolkit, though this is not an opinion held by all.

A few years ago I had an interesting conversation with a former Israeli special operator about this very topic. We were talking about SWAT and military special ops tactics and he said something like this: “Why do you Americans have an infatuation with shooting while moving?” He didn’t let me answer, but instead continued by saying, “Shooting on the move doesn’t make a whole lot of sense. It’s better to run as fast as you can, plant your feet and shoot.”

He has a good point, to be sure. Personally, I like to teach both methods. There’s a time and a place for both techniques, but I favor the move and shoot approach because of its versatility.

Sure, shooting flat-footed, static and stable greatly increases one’s ability to make accurate shots, but in a firefight, it’s movement rather than firepower that will likely keep you alive, whether it’s moving away from the threat, aggressively moving towards the threat or moving to cover.  This is because it’s really difficult for shooters (i.e. your opponents) to hit moving targets (i.e. you), so, to my thinking marrying the ability to move with the ability to initiate counter attacks is the best of both worlds and this skill should be acquired through training. Here’s how to do it: 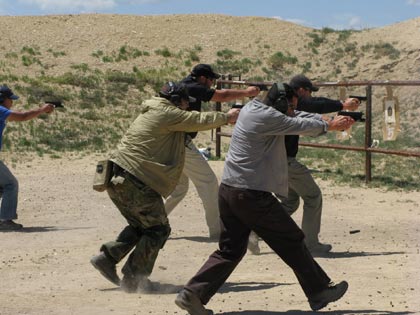 The key to shooting on the move is to keep your torso pointed towards the way you want to go. Your upper body (your torso) will be like a tank turret, so you can swing your weapon left or right. With this body position, you can get a good degree of movement when it comes to scanning the scene.

Lean a little forward at the waist and keep your knees slightly bent, but don’t bend your them too much. Leaning forward will help with recoil management. When aiming the gun, you want to rely on skeletal strength, not muscular structure because muscles fatigue easier (and moving will definitely hasten this fatigue). If you’re fatigued, you’ll get the shakes and if you shake, accuracy will suffer.  This is pretty much standard tactical shooting technique.

Additionally, facing forward will allow a natural walk, so you won’t have to cross your feet, which could make you unstable or cause you to trip. Moreover, body armor is strongest in the front. Therefore, face forward and move forward. 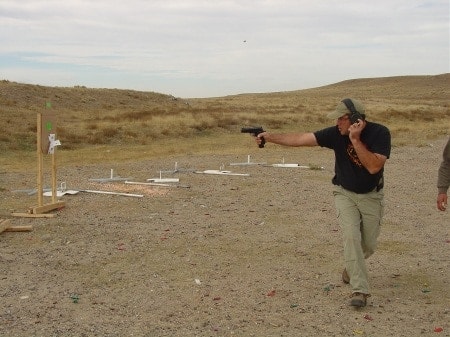 If you’re shooting a long gun, the buttstock should be in tight on your clavicle bone so you don’t have to lean your head for a cheek/stock weld. Leaning your head to the side isn’t natural and will waste time in a fight or flight situation. If you don’t believe me, try it without a gun. Tilt your head and then try to scan for threats. Doesn’t work, huh?

The same goes for canting your torso. When you cant your torso, you put your buttstock in your shoulder pocket. That’s fine for static shooting at the range and for deer hunting, but it doesn’t relate well to dynamic Close-Quarter Battle (CQB), also referred to as CQC–C for Combat.

As always, keep your finger straight and off the trigger until you’re ready to shoot to prevent a negligent discharge. And even though you’re in a firefight, by all means, keep your weapon pointed in a safe direction.  Realize that because you’re moving, that “safe direction” may constantly be changing so keep your head up and on a swivel and scan the environment for threats and safety alike. 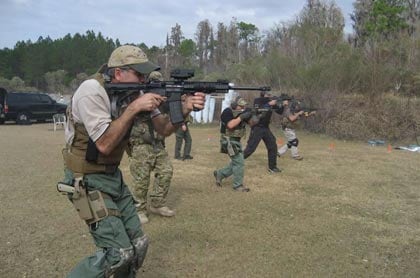 The key difference to walking and shooting and shooting while standing still is that your feet will be in closer together than normal. Usually with static shooting, your feet are shoulder width or slightly farther apart to created a steady base, but that just isn’t realistic when it come to shooting on the move.

Bring your feet in and walk. When in doubt, just walk normal and bend but make sure you keep your feet pointed straight to where you want to go in line with your torso. Roll your feet to keep from bouncing (this is will effect accuracy and takes some practice) and go heal to toe. When training, start out slow, then speed up but never submit to the temptation to run and shoot.  You will not be able to control the bounce in each step and your shots will be errant. This is not a good thing in lethal encounters so I repeat, never run and shoot.

One thing you should be prepared for when firing a round while walking is that unlike shooting static your feet will be both goofy-footed and not. In other words, you’ll be shooting with what feels like the wrong foot forward at times, which can throw shooters off. It won’t matter much if you rely on your sights and a smooth trigger pull. Ideally though shoot when both feet are planted on the ground.  You’ll be most accurate then.

Above all, get some good training from a qualified professional and stay safe.  Until next time, continue to hone your skills and keep adding to your tactical toolbox.