The gaming community has reported that Microsoft pulled all “gun-like” avatar props from its XBox LIVE marketplace, effective Jan. 1, 2012.

Gears of War developer Epic Games announced the news on its community forum.

“Heads up! Starting on Jan. 1, 2012, the Lancer and Hammerburst avatar items will no longer be available on Xbox LIVE Marketplace. If you’ve purchased the items prior to Jan. 1, you will be able to keep them. A new policy goes into effect for all gun-like avatar items on the Marketplace, so get them while they’re hot.”

Microsoft has yet to officially confirm the new restriction, but many believe the move reflects a desire to shift toward a more family orientated gaming environment.

The Avatars debuted in Nov. 2008 and provided a way for a gamer to create a cartoon-like character that represented himself/herself in the gaming world.  A player can adjust the physical attributes (height, weight, skin color, hairstyle, etc.) of his/her avatar.

In Aug. 2009 an ‘Avatar Marketplace’ was created to allow a gamer to purchase props (like guns from certain popular video games) for his/her Avatar. 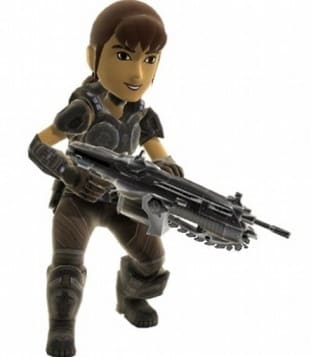 However, all along, there were certain restrictions on Avatars.  For example violence, smoking and talking were prohibited.

Many in the gaming community see this new restriction as an affront to the core constituency of XBox LIVE.  They argue that users playing the first-person shooting games (Call of Duty, Halo, Grand Theft Auto, Gears of War) were critical to Microsoft’s early console success.

Now, by removing gun-props from Avatars to ensure younger users playing games like Kinect Sports are less exposed to them (one’s Avatar is universal, and shows up on any game he/she plays), seems to be, at least to long-time gamers, an unreasonable compromise (remember, users who already have gun-props will still continue to display them, so this begs the question, why stop selling them in the Avatar Marketplace?).

Proponents of the new restriction say it’s consistent with industry standards and point to the fact that other game makers, like Sony and Nintendo, have never offered gun-props for their avatar based-characters.