Last year, around this time of year, Philip W. Taylor was peacefully walking along the sidewalk adjacent to University Mall in Orem, Utah.

The 51-year-old Orem resident was carrying an assault rifle slung over his shoulder and a handgun.

Shoppers in the nearby mall called the police on Taylor.   The police shortly arrived to the scene.

“Keep your hands where I can see them,” an officer shouted at Taylor.

The officer asked why Taylor was carrying a gun?

“Not open carry for an assault rifle,” the officer reprimanded.

The police swarmed in and handcuffed Taylor.  After checking his firearms, they determined that they were unloaded. 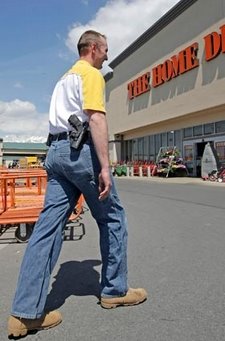 And although Taylor was not breaking any laws for openly carrying his firearms (despite the officer’s claim), the police labeled his actions as reckless and he was charged with disorderly conduct, a class C misdemeanor.

According to Orem Police Sgt. Craig Martinez, it wasn’t the first time Taylor was stopped for lawfully carrying his firearms.

“We dealt with him in the middle of December (2010), two days back-to-back for the exact same thing, walking down the street with guns that were not loaded, and in both of those circumstances, we checked him out and let him go like we did here,” said Sgt. Craig Martinez told KSL.com.

This time the charges would stick.  Taylor was convicted of disorderly conduct, fined $500 and placed on 12 months probation.

He was also ordered to seek a mental health evaluation as part of his probation, according to court documents.

Hearing of this story and others like it, Rep. Paul Ray, R-Clearfield, decided to propose a bill for the 2012 Utah Legislature that would prohibit a person who is lawfully carrying a firearm in public from being charged with non-firearm related crimes such as disorderly conduct or failure to disperse (for a more detailed breakdown of what’s included, click here).

The bill is entitled H.B. 49, “Firearms Revisions,” and states “… in the absence of additional threatening behavior, the otherwise lawful possession of a firearm visible or concealed” would not constitute a violation of Utah’s various criminal provisions and statutes.

In short, if the bill is passed law enforcement can’t arbitrarily charge one with a crime for lawfully carrying a firearm – as in the case with Taylor.

According to KSL.com, “other provisions of the current HB49 say that local authorities may not enact laws that place any restriction on the lawful possession of firearms without explicitly referring to the specific state law that grants them such authority. And any law that does not meet that requirement would become void, according to the bill.”

Not everyone is on board with Rep. Ray’s “Firearms Revisions” bill. 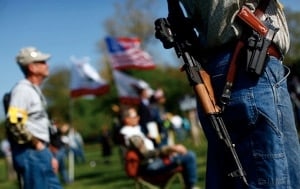 Steven Gunn, a board member of the Gun Violence Prevention Center of Utah, told KSL.com, “The bill appears to be an attempt to clarify ambiguities in existing Utah statutes about open-carrying firearms; however, it seems to expand the rights of gun owners to display such weapons, not merely to codify the status quo.”

Gunn added that the bill would “make it harder for private property owners, such as store and mall owners, to exclude someone from their property who is openly carrying a gun.”

“Representative Ray chooses to cater to extremists rather than those who seek public dialogue and open expression of unpopular views,” Gunn wrote in an email to KSL.com.