This past Tuesday, patrolman Daniel Harless was fired from the Canton, OH Police Department.

Safety Director Thomas Ream explained the reason for his termination in a three-page ruling released earlier this week.

“I find that Ptl. Harless’ actions were not a one-time breakdown of professionalism and training standards. It is quite clear that his actions represented a pattern of behavior where inappropriate verbal abuse and threats of death or great bodily harm to various complainants occurred. This escalating pattern of potentially dangerous behavior cannot be justified or excused and clearly illustrates the seriousness of the departmental infractions,” said Thomas Ream.

In June of 2011, Harless pulled Bartlett over for driving what appeared to be a suspicious vehicle.

During the stop, Harless berated Bartlett for failing to disclose his CCW status from the outset, “as soon as I felt your gun, I should have took two steps back, pulled my Glock 40 and just put 10 bullets in your ass and let your drop. And I wouldn’t have lost any sleep. Do you understand me?”

Bartlett claimed he tried to tell Harless that he had a valid CCW permit and a Ruger pistol on him, but Harless kept interrupting him.

Harless also told Bartlett that he was “so close to caving in (Bartlett’s) head.”

In November, Bartlett appeared before a municipal court judge.  The judge threw out a concealed carry charge that was filed against him as a result of that June incident.  But he did plead ‘no contest’ to a traffic violation – stopping in the roadway – and was fined $150.

With respect to Harless’ recent termination, Bartlett had no sympathy.

“He faced his peers. I’m kind of happy he lost his job, but I’m kind of skeptical too,” Bartlett told reporters. “All and all, I think justice was served. I think the streets will be safer now.

Bartlett has good reasons to be skeptical, as Harless does not plan to go gently into that good night.

Despite being involved in 21 internal investigations and despite being caught on camera, (the cruiser dash cameras) multiple times, violating “rules for conduct, cooperation with the public and handling persons,” Harless plans to appeal the ruling.

His case for appeal is based on his claim that he has PTSD.

According to Bill Adams, the president of the Canton Police Patrolmen’s Association, Harless has PTSD from a 2003 incident when a suspect tried to bite off Harless’ finger while trying to get at his gun.

“Obviously, it’s an unfortunate set of circumstances that transpired,” Adams said. “We feel that due to the fact that (Harless) has PTSD, that nobody realized it for eight-plus years, for it to come to light the way it did … this is not a way we wanted this to play out. PTSD is obviously a disease.”

Adams added that since the June incident, Harless has been diagnosed with PTSD several times. 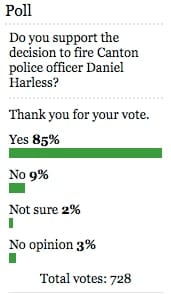 “Most people that have a bad day on their job can go home, put their legs up and relax,” Adams said. “We can go home from our jobs in a body bag or with a serious physical injury from the hospital.”

But Safety Director Ream made note of Harless’ claim of PTSD in his ruling.

“The diagnosis was not sought until after the incidents had occurred, however, and was initially the result of the city ordering him to undergo an examination due to these incidents,” Ream wrote. “(Patrolman) Harless did not seek any help or treatment on his own during the lengthy period encompassed by these incidents.”

“After a very thorough review of the internal affairs cases … this hearing officer (Ream) certainly feels that mental health issues played a role in the actions of (Patrolman) Harless,” Ream added. “I encourage him to continue to seek assistance with these issues from both local and state resources.”

Harless’ appeal will go before an arbiter who will make the final decision.

“It affects people in different ways. Unfortunately, (Harless) had PTSD, and it wasn’t realized for eight years,” Adams explained.  “Unfortunately, he was fired, and we will address that situation at a later time.”