Stranger Rescues Children from Drowning with Help from Carry Gun

A gun is not just a weapon; it’s a tool.  Gun owners know this, but not everyone outside the gun community is aware of this fact.

As a result, gun owners often receive looks of incredulity from the general public when they talk about their favorite EDC sidearm in terms of its utility beyond the scope of the label “deadly weapon.”

A recent story out of Logan, Utah, should serve as a ‘teachable moment’ for the general public in this regard because it showed that like any tool, guns can be used for a multitude of different jobs or tasks, especially in the case of an emergency.

The Logan story goes like this (also, see video below):

Earlier this month, Roger Anderson was driving along an icy and tortuous Utah canyon road en route to a ski resort with his 9-year-old daughter Mia, 4-year-old son Baylor, and, friend of the family, 9-year-old Kenya Wildman.

Suddenly, after tapping on his brakes, the 46-year-old lost control of his vehicle and slid into a nearby river. 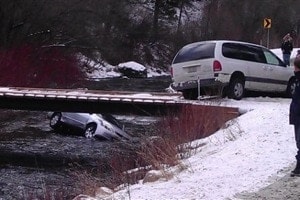 “In a second, I was completely off the road and sliding down the embankment,” Anderson told reporters. “Within a second, the entire cabin of the vehicle was full of water.”

He tried not to panic, but the outlook was bad.  The car had flipped over and the three children were submerged under the frigid waters.

“The first thought was, ‘So this is it how it ends,” Andersen told ABC News while choking back tears. “This could very easily have been a funeral for four of us.”

But thankfully Anderson was not the only one traveling along the road that day.  After freeing himself from the car to get some air, he noticed that he had acquired some new friends that were willing to lend him a hand.

“In no less than 10 seconds, there were a half-dozen men standing on the banks of the river, and they’re questions to me were, ‘Who else was in the car?’”

Anderson told them about the children.

“Within five seconds, there were eight men in the river … ready to assist,” he added.

One of the first men in the water aiding in the rescue of the children was former police officer Chris Willden.

In order to improve his ability to reach the trapped children, Willden shot out one of the car’s windows.

He then used his pocketknife to cut the seatbelts that were holding the children down.  Once the belts were removed, the children were quickly pulled from the car and passed up the riverbank, one-by-one to the other rescuers. 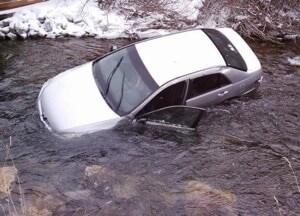 “I remember thinking to myself, ‘You’re going to see some dead kids, get ready,'” Willden said. “I’ve got three of my own and it was going to be (an awful) start to the New Year.”

Both of Anderson’s children were unconscious and not breathing.  A rescuer performed CPR and revived them both.

The children were then flown to a hospital in Salt Lake City and treated for hypothermia.  They were released a few days after the incident.

“In a matter of a couple of days, now Baylor is running around just like nothing ever happened to him, and Mia is fine and Kenya is also fine,” Anderson told reporters. “It’s a story to me that is inspiring in many ways.”

While this story has many important lessons, the kindness and selflessness of strangers, how important it is to drive safely in inclement conditions, hopefully it will also help to educate folks that guns are indeed tools.  And that it’s better to have and not need, than to need and not have.