The Axe Gun: Boarding Pass of the High Sea

You may have seen that beauty up there before.  It’s our sad duty to tell you it isn’t real.  It’s a computer-generated picture of an axe gun.  But that doesn’t mean it’s all over but the crying.  The axe gun is real, and like a lot of combination weapons made during the reign of black powder, saw a lot of use.

The boarding axe saw its height during the Age of Sail, on account of it being a naval multitool, much as the modern fireman’s axe is, not to mention the similarities in their designs.  It so happens to be that they were used in similar ways, too:

“Space on a wooden warship being at a premium, many artifacts of everyday life were downsized to fit the new reality. Swords became cutlasses, pikes became boarding pikes and axes became… these. 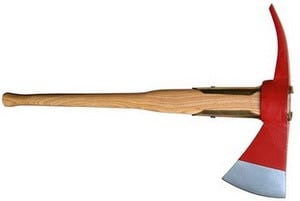 “First and foremost a tool; a firefighting tool, the boarding axe was invaluable in the heat of battle as well. Grappling lines could be chopped loose, downed spars and lines cut away and, if boarding rather than being boarded, hatches and bulkheads could be smashed in and, if it came to it, the axe was a fearsome weapon.

“This oft-overlooked piece of our material heritage lives on in our world as the modern fire axe.”

And eventually, the boarding axe would become this:

That is an authentic Spanish axe gun.  It sold recently at an auction for a hair under $3,000.

There are very few boarding axes still around, and even fewer axe guns.  Also commissioned by sailors at the time were bowie guns and cutlass guns, which are highly prized today.  Our best hope of ever getting one to hold, let alone shoot (and frighten boaters with) is to have one custom-made.

And it might be a lofty goal, and it might be entirely useless, but we really want some axe guns around the office.  Of course, then all of our articles would be written in Pirate.  Yarr.

No, we wouldn’t mind owning a contemporary axe gun, not when they’re as classy as this: 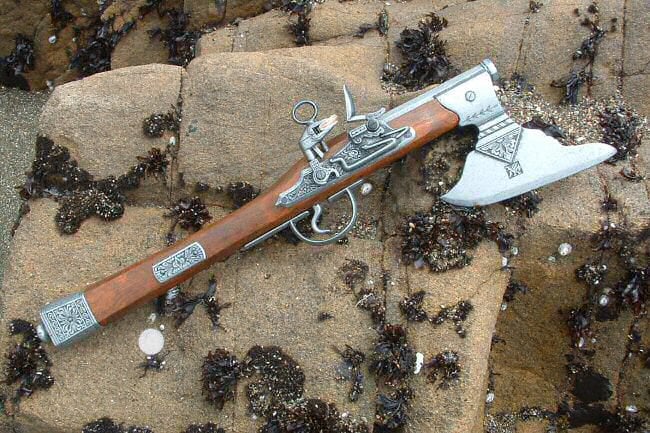 There were many interesting combination weapons back in the Age of Sail.  Do you have a favorite?