TSD Combat Systems is a custom gun shop that’s been turning out competition-ready pistols and pistol parts complete with serious waterproofing and red dot optics.  Now they’ve developed a line of AK rifles with rails out the wazoo.

They start with new, hand-selected Saigas in 7.62- or 5.45x39mm, and dress them up with some of the fanciest furniture from the great people at Midwest Industries, VLTOR, Ultimak, US Palm, and Magpul. 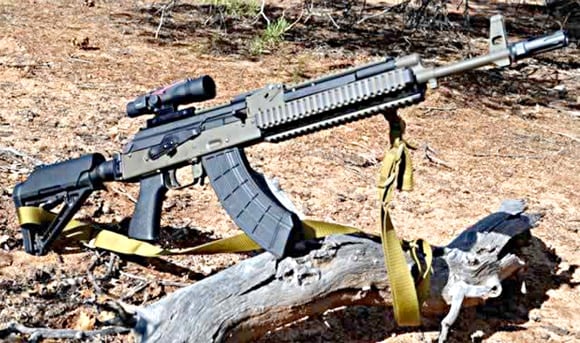 They have four models, two are somewhat basic, the Basic Kalashnikov and the Enhanced Kalashnikov.  The Basic is a converted Saiga with a VLTOR adapted Magpul CTR buttstock, US Palm pistol grip, and standard Midwest Industries handguard.  It also has a Bulgarian-style flash hider.

The Enhanced goes a little further out, installing a low-mount Ultimak rail out front instead of the Midwest Industries handguard, and a Texas Weapon Systems Dog Leg Rail topcover.  It also comes with the option of AAC, Surefire, or PWS muzzle devices.  The Basic is only comes only in black, where the Enhanced is available in black, coyote tan, and olive drab. 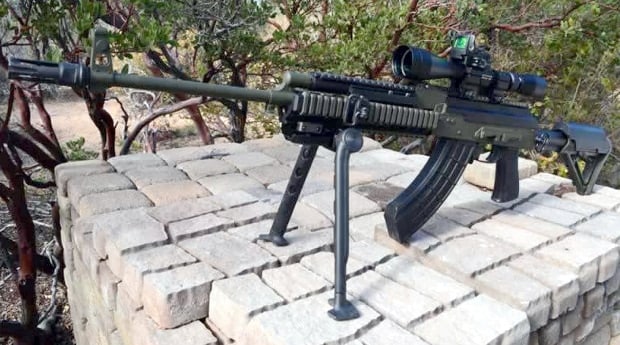 There are two other slightly more interesting rifles available as well, the CQB and DMR.  The DMR is a converted Saiga with a 20.5-inch barrel, which are hard to come by and we wonder if they’re not custom.  The rest of the package resembles the Enhanced Kalashnikov.  It’s too bad it’s not available in 5.56x45mm, as most NATO ammo benefits considerably more from the extra four inches of barrel than the Russian stuff does.

And finally, we get to the CQB.  Its got a cut-down, 14.5-inch barrel with a permanently-attached AAC Blackout flash hider; in addition to being suppressor-ready, with an overall length of 16 inches, it’s not a short-barreled rifle, and as such, needs no tax stamp.  Like the Basic, it only comes in black, although it does get the Dog Leg Rail and extra sight radius. 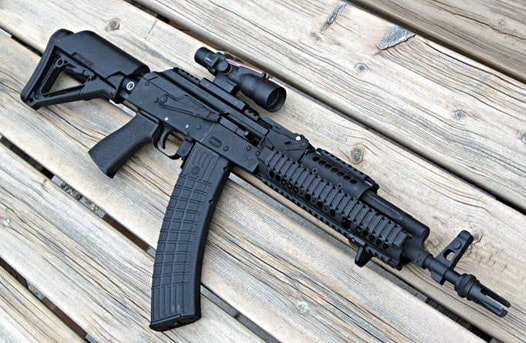 Custom jobs like this aren’t cheap, and these sport a price a bit higher than even Arsenal Saigas.  The Basic Kalashnikov runs $1,090, and the most expensive, the DMR, $1,750 (available from One Source Tactical, by the way).  They all have several hundred dollars worth of parts added, before installation and refinishing.

But we like the choices they’ve made in making these tacticool AKs.  It’s hard to say they don’t know their upgrades.  All that said, would you pay custom AR prices for an AK?  Given that these are essentially just converted Saigas, would you rather do it yourself?