Just Right Carbines has been making understated, low-priced pistol-caliber carbines for a while now, loosely patterned on the AR-15.  These guns do use AR furniture and internals, though, not to mention, Glock and 1911 magazines.

Both the uppers and lowers are significantly different from standard AR receivers.  The lower is a two-piece modular design with a compact forward magazine well and the rear piece home to a standard AR trigger and grip.  The upper resembles an AR upper in that it’s attached to an AR buffer, buffer tube, spring, and stock, but the other similarities end there. 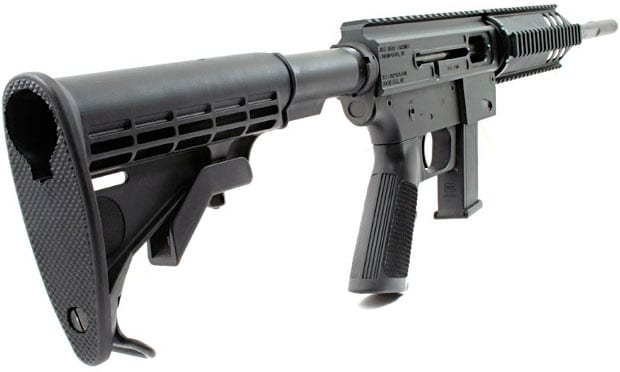 The front part of the receiver has is ambidextrous, in that it can be configured to eject on the left or the right side, and have its charging handle reversed.  It’s a flattop-style upper, with a full-length Picatinny rail to match the carbine’s quad Picatinny rail.  Just Right Carbine’s carbines don’t come with sights; those you have to provide on your own.

The newest two models are chambered in .45 ACP, and there will be one that accepts Glock magazines, like the other carbines, as well as one that accepts 1911 mags, which will clearly draw a crowd.

Just Right Carbine’s guns have proven to many people that their simple blowback operation, combined with some elements of the well-proven AR platform, is extremely reliable, easy to customize, and just fun to shoot.  Carbines are also a lot more powerful than handguns and we think they’re good for more than just plinking.

They’re fast-handling and quick to take up, from a beginner’s perspective.  But they’re also priced well, compared to other AR pistol carbines or even just pistol carbine uppers.  These retail for $600 or less, come with one magazine, and are available in Cali-compliant models, to boot.  Also Just Right Carbines sells caliber conversion kits to swap between the available calibers.

Because if .45 ACP doesn’t pique your interest, then be sure to know that they’re also available in 9mm and .40, and in desert and pink camos in addition to plain black.

Pink is the new black.