At one time (and some may say even today though with a much softer hand) gun tycoons really ran the show in this country and Connecticut industrialist Samuel Colt was no exception, rather the crowning example.  The dominant American industrialist of his era, Colt generated wealth that was so immense, at the time it could be measured as a percentage of the U.S. Gross Domestic Product and, as is usually the case whenever a single, brilliant man amasses this much power, their attempts at outside the box thinking can get really outside the box. Need an example? Take Coltsville.

Colt’s Patent Firearms Manufacturing Company was established in 1847. Company headquarters was located on 250 acres, secure from floods behind a 2-mile dike on the Connecticut River at Hartford, complete with wharves and docking facilities.  By 1856, Colt presided over a significant workforce and the largest Armoury in the world (i.e. the men and resources to accomplish just about anything) and he set his sights on fine-tuning the make-up and out put of the company ranks. 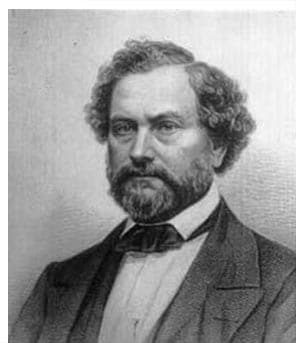 Any biographer of Colt would concede that he was an eternally curious man, driven on some level by the pursuit of innovation and it was most likely in service to innovation that he attended the Crystal Palace Exhibition in London in 1851. While in London, Colt observed Britain’s industrial tenement houses—a leaky system that sought to organize and manage the crucial labour supply for England’s booming textile mills by mandating they stay in company maintained provisions.

Far from proper employee housing, these facilities were barely hovels, warehousing rather than housing, workers locked in gruelling jobs with few options.  And Colt liked the concept (hey, he was a 19th century industrialist, not a saint) but he immediately foresaw problems in importing the tenement system back to Connecticut.

First off, unlike the uneducated, unskilled labourers of the textile mills, a good portion of Colt employees were skilled workers, coming to the company as tradesmen or poached by Colt from thriving cottage industries.  These craftsmen were handpicked and courted by Colt  personally because of their intimate knowledge of machining and gunsmithing.  Far from hopeless, many had families living in Europe or elsewhere and it unlikely they would leave their loved ones behind for work. Though the bulk of his employees were “unskilled” general labourers, the “brain trust” of his workforce would balk at living in what essentially amounted to institutional housing.

Undeterred, Colt envisioned a kinder, gentler version of these tenements (at least on the outside), one that provided just about every service a man could want for himself and his family and that would feel welcoming to homesick immigrants.  He called his dream town Coltsville. 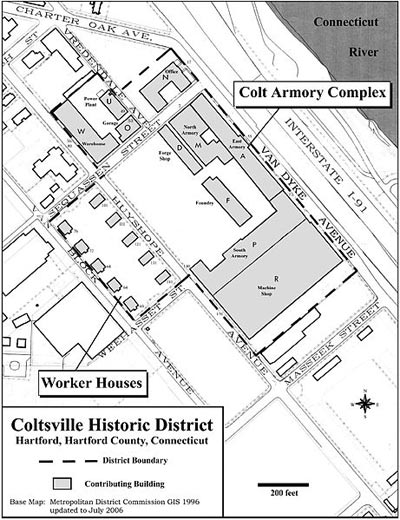 Or more accurately, he called his dream towns Coltvilles because he ended up creating two separate Colt factory towns.  The first, maintained independently from Coltsville proper, closely resembled the company housing Colt saw in London. The compound consisted of a series of large, Spartan dormitories with limited amenities.  These were for single male workers who represented the unskilled labour pool and Colt ran this facility in step with other factory owned operations at the time throughout the industrialized United States: “Do your job, work the mandatory overtime and Sundays to fulfill the government contracts. Don’t get injured because you won’t get paid.”

The second Coltsville (the real Coltsville) must have seemed, for a German immigrant coming to America for the first time, like paradise. A Disney-esque Bavarian facade built on the Armoury Grounds, the town was a near perfect recreation of a traditional German village and its sole purpose was to lure engineers, managers and skilled craftsmen to emigrate from Potsdam, Germany, the main region of European gun craftsmen.  Colt had discovered these gunmakers while traveling (which he did often). He had used their expertise while abroad to craft engraved revolvers which he liked to present to royals dignitaries.  Impressed by their work, Colt decided he had to have these Potsdam gunmakers working for him at any cost.

Coltsville had its own railway depot, sewers, stables, docks, gas works and wharves for ferry boats.  There was also individual residential housing with windmills for running water and a farm for vegetables as well as produce stands. 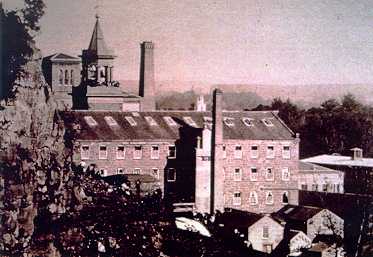 Colt provided a reading room and library, a school, a park with a miniature lake, a theater, a church, manicured lawns and a military band. There were vineyards and a beer garden, as well as the Colt Fire Engine Company.  To Colt, all of these amenities were aimed at creating a kind of morally sound, all-in-one environment, that in his mind was conducive to good work and good living and that would keep his German employees happy and landing on America’s shores.

He tried his best to authenticate the Disney-Coltsville down to every detail, even introducing a non-native species of osier (i.e. willow).  Planted on the Armoury dikes,  the trees were intended to allow for the Bavarian craft of making willow furniture and baskets and eventually lead to the profitable Colt Willow Works—a major furniture producer throughout the mid to late 1800s.

To complete his illusion of a company-funded Xanadu, Colt and his young bride Elizabeth Jarvis Colt, a Minister’s daughter, built their own industrial plantation house called ‘Armsmear’ on the Armoury Grounds overlooking Coltsville. By the time of his death in 1862, Colt’s own estate would boast some 2,600 feet of greenhouses, fountains, ponds and a deer park.  Since 2008, along with the remaining pieces of Coltsville, Armsmear has been designated a National Historic Landmark. 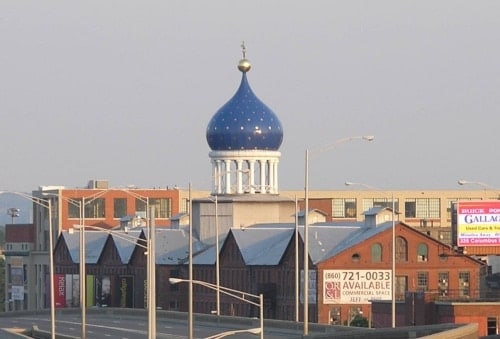 In life, Colt was known to be less than scrupulous in his business dealings, paying brides to reporters and politicians for favourable reviews of his products and his premature death at 48 left his legacy open to ridicule (most persistently that the industrialist died of venereal disease).
Colt was known to accept accolades for creating the Bavarian village from the business community while regularly working the factory labourers for 14-hours, seven-days a week with little compassion and this tyrant persona would remain in the years following his death.

Elizabeth Colt fought tirelessly to save the Colt’s legend before her own death in 1905, even going so far as to have Colt’s body exhumed and interred in a more prestigious cemetery. As it would turn out, with advances in marketing , industrialized production accredited directly to him and over 400,000 revolvers bearing his name, Colt’s reputation didn’t need too much saving.

Samuel Colt was a man both of and ahead of his time and he ran his firearm empire accordingly.  Though his rap sheet was long with labour breeches and backdoor dealings, experiments like Coltsville helped change America from a promising upstart to an Industrial powerhouse and cemented the northeast Unites States as a Mecca for the firearms industry (so much so this area of the country still bears the name Firearms Valley).  And for that, we can forgive him his sins.