Tueller drill: How close is too close when faced with an attacker?

In March of 1983, Salt Lake City Police Sergeant Dennis Tueller wrote an article for SWAT magazine that would help change defensive police tactics forever (and forever changed the argument of how dangerous a knife wielding assailant can really be). At the heart of this debate (which is just as valid today as it was in 1983) is how close is too close when the players are you, your carry weapon and an attacker?

Observations in the “too close” conversation tend to circle around this paradox: if you shoot an attacker armed with a knife from a distance of “too far away” you are liable to be charged with murder. If you wait until he’s too close though, you will end up hurt or worse.

What is needed here is an effective barometer to determine where legality ends and danger begins and in service of this, Tueller was able to empirically prove how quickly someone with a knife could close the distance between you and him, with shocking results. 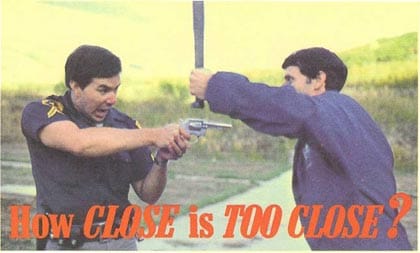 Tueller did extensive research with volunteers from his precinct to determine just how fast (and from what distance) an attack with a knife could potentially occur. He asked participants to run at and stab a target from a distance of 21 feet, timing each attempt.  He then compared this time to how fast his volunteers could draw and accurately fire their side-arms.  The drill yielded two interesting finds:

This study turned law enforcement and self defense tactics on its ear. Before, no one could have possibly believed that someone with a knife could move so fast over such a short distance.  In fact, this is why most self-defense instructors run drills at this distance—seven yards.

Tueller was responsible for identifying this range, which he would later term the “danger zone”, but this in and of itself was only trivia without a plan in place to effectively combat the attack. The problem Tueller saw with a knife-wielding attacker is that even if you were to draw and shoot him (or her) in time, their forward momentum may carry their body (and blade) right into you. So what to do?

In order to best legally justify the use of deadly force and stay at a safe distance away from the attacker, Tueller suggested, as many others in the field have since, that you:

1.     Draw your firearm as soon as the threat exists, regardless of distance. The sight of the gun itself is a deterrent and the conflict could end before it even begins.
2.     Issue a verbal challenge such as “Stop! Don’t move!” which could work towards ending the conflict and will also bolster your legal case because you can argue that you tried your best to diffuse the situation should you actually have to fire at your attacker.

Another technique, which is practiced in LEO circles and comes highly recommended, is the step-back technique.  The technique entails exactly what you think it does: you take one long step back as you draw which gives you some extra distance between you and your opponent. This can only be mastered by practice and more practice, but it is certainly one that benefits the defensive shooter in life and in the courtroom. 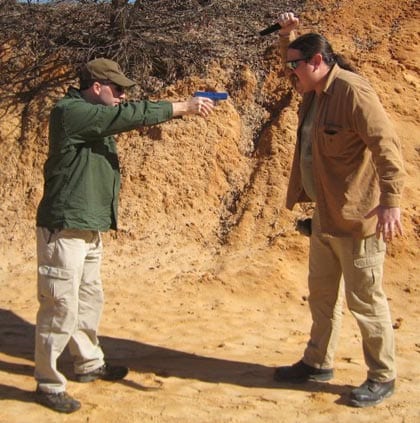 How Do I Practice the Tueller Drill?

The simplest way is to recreate Tueller’s experiment just with silhouette targets out at about seven-yards.  Just consider the 1.5 seconds it would take for that attacker to get to you, try your best to envision a “ghost runner” and shoot in this time frame.  A friend with a stopwatch works very well, but you will most likely need a second person to time you.

Another practice technique that is more illustrative of the actual scenario (and therefore more stressful meaning it should be done on a controlled range) is to you have your second person start from seven yards from behind the shooter. At go, the second person runs at the shooter from behind (in a controlled manner) and attempts to tap him or her on the shoulder before the shooter can draw and fire on the silhouette target in front of them. If the runner/“attacker” taps the shooter on the back before the shot is fired then the course was failed. Again this needs to be done carefully.

You don’t even need to fire live rounds to practice this drill.  If you have a dummy gun and dummy knife, then having an “attacker” armed with the knife charge the person with the fake gun would provide a realistic scenario of how fast someone can truly close the distance.

Sergeant Dennis Tueller has largely gone unsung for his efforts to help train law enforcement and civilians for their personal protection against an attacker with a knife.  It was an aspect of self-defense that was largely ignored before his research, yet nearly thirty years later his findings (and techniques) are just as valid today.