Just before SHOT Show, EAA announced a new, somewhat tactical, very compact, lightweight, and fun-looking rimfire bullpup.  There will be two different models here in the U.S., one in .22 Long Rifle and one in .22 Magnum, which should make a lot of plinkers happy.  We definitely like the looks of it, and got to handle one in person. 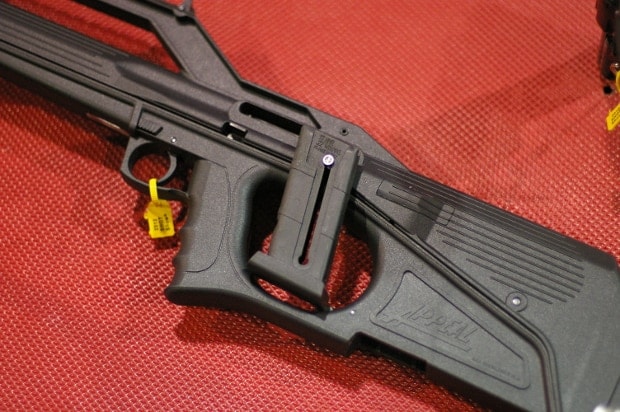 This bullpup, made by Tanfoglio, is mostly polymer.  It weighs almost nothing, at about 4½ pounds, and aside from the bolt release lever, is completely reversible for left- and right-handed shooters.  The bolt release is on the left side of the rifle, but it’s positioned in a way that is accessible from both sides easily.  The trigger is… the trigger.  You’ll know it when you pull it, and you won’t pull it without knowing it. 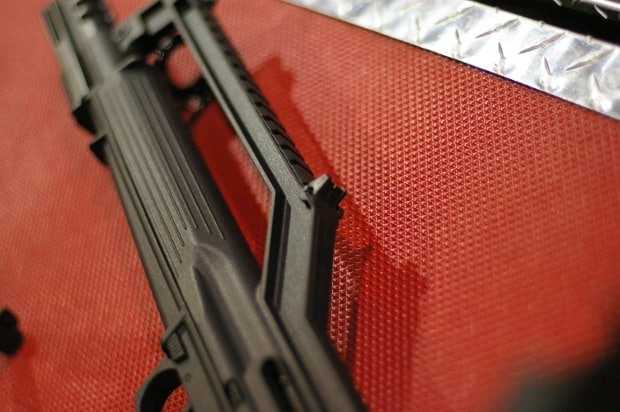 Not being allowed to shoot it, we can’t speak to its function or reliability, but for an automatic rimfire it has a nice, heavy bolt and tight action; it certainly feels like it shouldn’t have any problems.  The magazine is mostly polymer (10+1, 5+1 in Italy, believe it or not), but it’s chunky in a way that means you could probably drop them in the mud and stomp all over them and they’ll work fine after a cleaning.  The magazine release catch is inside the very large thumbhole and seems extremely natural. 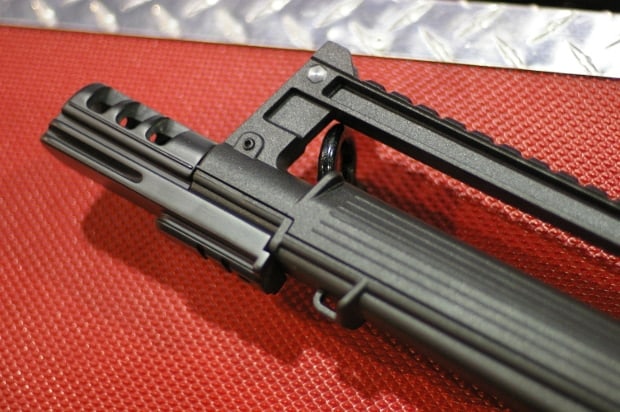 The aesthetics most people will either love or hate, which is the case with most rifles of this style.  The buttplate is modular and can be lengthened by inserts.  The top sight rail is long enough to be useful with iron sights, which are adjustable for windage and elevation, and actually quite sharp; sharp enough for somewhat precision work for iron sights.

Of course, the whole sight array is also a Picatinny rail for optics of all sorts.  It would be easy to put a low-mount red dot sight on there and get a partial cowitness.  It also has integrated sling attachments and a muzzle break/under-barrel Picatinny rail muzzle device, which some people might even find something clever to do with. 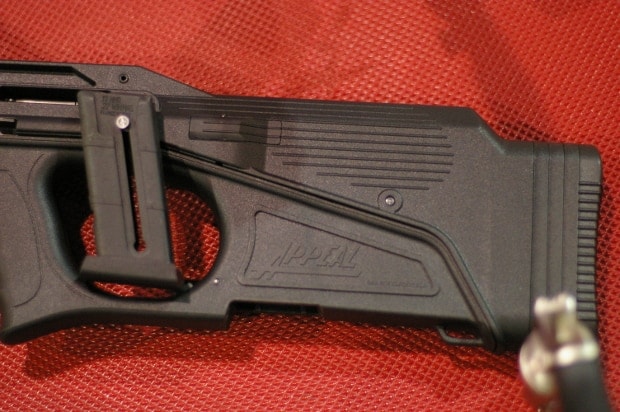 One interesting thing about it is that the .22 Magnum magazine is marked for both mags and .17 HMR.  Unfortunately, they’re having some issues with headspaceing or chambering or somesuch at this time; .17 HMR is a ways off but certainly not off the plate.  The vice president of EAA spoke to us and said the plan to continue working on other chamberings, specifically the .17 Hornady Magnum Rimfire.

This Tanfoglio Appeal is light enough to take with you just about anywhere, and small enough to fit in tight spaces, even under a car seat.  The fact that there is a .22 Magnum is guaranteed to make people happy, but it’s always a good idea to include something in .22 Long Rifle, too.