Ford Motor Company is participating in an open competition to supply the Army and Marine Corps with new blast-proof, all-terrain vehicles.

Up for grabs is $54 billion in government contracts and the pride associated with replacing a U.S. military staple, the Humvee.

The second phase of the Joint Light Tactical Vehicle (JLTV) competition, which officially starts Jan. 20, is expected to be fierce.  And Ford isn’t the only commercial-truck maker to enter the ring. 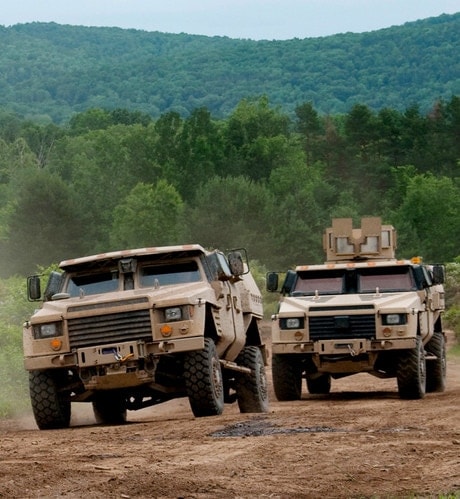 Truck makers like Navistar, International Corp and Oshkosh Corp are also hoping to make a splash in the competition and dethrone savvy defense companies, like General Dynamics Corp, Lockheed Martin Corp and BAE Systems Plc, who are also vying for those government greenbacks.

In this year’s defense spending bill, Congress suggested that the military embrace “off-the-shelf-technology demonstrated by industry” to develop vehicles that would provide increased protection from improvised explosive devices (IEDs).  This language proved to be a calling card for commercial truck manufacturers.

The effort by Ford, which is the second-biggest U.S. automaker behind General Motors, “is a very intriguing strategic move,” Brian Johnson, an auto industry analyst for Barclays Capital Inc. in Chicago, told Bloomberg in an interview. “The benefits are finding an additional market for your most profitable vehicles, such as large pickup trucks, especially at a time when the retail demand is at the mercy of gas prices.”

However, not everyone believes that existing commercial truck equipment and technology will pass muster.

“We don’t believe that there is an off-the-shelf commercial vehicle today that will fulfill the requirements of the JLTV program,” Kathryn Hasse, a program director for Lockheed, told Bloomberg in an interview. “It’d be nice to use a commercial chassis to do it. The reality is, it’s just not rugged enough.” 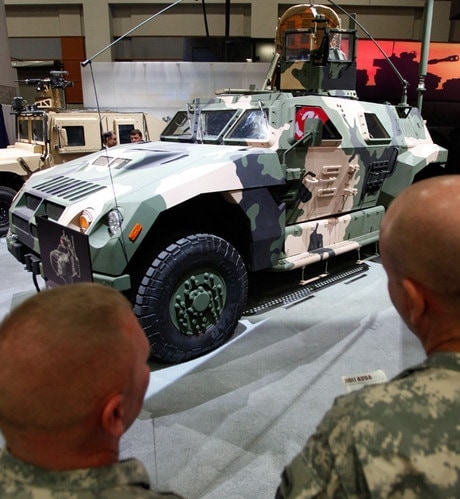 Whether the new JLTV design comes from a commercial truck maker or a defense company is irrelevant, so long as it works.

The bottom line is that the status quo will not suffice.  Looking back at the wars in Iraq and Afghanistan, almost two-thirds of all U.S. casualties were caused by bombs and IEDs, including more than 3,000 troops killed and more than 32,000 injured, according to Pentagon statistics through Jan. 3.

“We’re coming back mangled and just beat up, missing limbs, and we need the right tools, the right vehicles, out there for it,” Octavio Sanchez, told Bloomberg.  Sanchez, a former Marine staff sergeant, was critically injured in Ramadi, Iraq, in 2005 when the Humvee he was riding in struck a roadside bomb.

By June, the Army hopes to move on to Phase III of the competition.  By then, it will have winnowed down the list of competitors to three.  Those three remaining competitors will each be awarded a $65 million contract for the engineering and manufacturing portion of the competition (Phase III).

When all is said and done, the Army and Marine Corps together plan to purchase about 55,000 new vehicles to replace some of the 175,000 Humvees currently being used by the military.