Putting a Crimp in Your Plans: What's the Right Crimp for Your Reloads?

An often asked question I get when someone mentions reloading handgun rounds is how important the final step to reloading is: crimping the bullet once it has been seated in the brass. This is actually a much tougher question to answer than you may have thought because there are many types of crimps for many types of calibers and simply not all crimps are created equal. 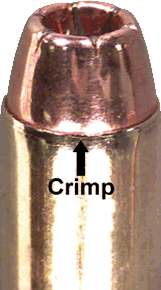 You should be trying to figure out what kind of crimp you will need before you even begin to load a single case and the first thing you need to consider when determining what type of crimp you are going to use on the round is the type of gun you are reloading ammunition for. If you are going to be reloading for a revolver than you will be using a roll crimp, but if you are loading for a semi-auto pistol you will need to use a taper crimp since they require headspacing on the case mouth and a slight ledge must be left to provide positive positioning once the round is chambered automatically. Even then though, picking out a specific crimp style is not as quite as simple as this one or that one.

For instance, a hard recoiling round like a .357 Magnum or .44 Magnum will need a heavy crimp, while a mild .38 Special will need a mild crimp and so on and so forth. Some of your more aggressive cast bullets, like those designed back in the 1930s, were ahead of the game and set up with a heavy crimp groove on the bullet to accept roll crimps. Many of these were conceived by Elmer Keith who only loaded his handguns one way—as hot as he could get away with—and he wanted bullets up to the task and secure in the case.  Pretty much every cast bullet for revolvers since has followed with few exceptions.

Before you even get to the part of crimping your bullet it is best that you have all your cases trimmed to where they need to be.  If you don’t do this now, it will show up later.

Several reloading dies like those from Lee let you crimp using your seater die but I prefer to buy a separate crimp die to make things more uniform.  That and it seems easier to use to me.  Ammosmith give a good tutorial on basic crimping which you can watch here:

For reloaders, it’s a simple process detailed in any manual that comes with the equipment. A roll crimp entails forming a slight radius at the case mouth by pressing it inward against the bullet. How tight you make this, depends on the caliber as detailed above.

With a semi-auto pistol and the taper crimp the name is somewhat misleading, you only want to hold the bullet in place and it doesn’t take a lot to do this and it is easy to put too much of a crimp thereby deforming the bullet and ruining the accuracy. You only want a crimp of a hundredth of a thousandth of an inch to keep the bullet from moving around in its case.  This is really almost nothing and is very easy to overdue. Many folks start out with a 1/8 to a 1/4 turn when it comes to the amount of tension they’re putting on the neck of the casing and adjust from there.

Here’s some things to watch out for crimping either cartridge:

1.     Size the case so that the bullet just fits in mouth opening without slipping out the front for sliding back in the case.
2.     Make sure, when you put your crimp arm and appropriate die on the press you leave enough torque in the crimp arm to effectively adjust the crimp pressure of the case. 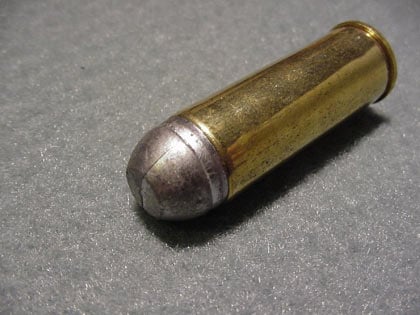 Once you get your revolver cartridges loaded, a good way to make sure that your rounds won’t shift loose is to load up six and then fire off five. Take that one round that you didn’t fire and load it up with five more and fire off all but that single round from the previous cylinder. If that single round has handled ten without shifting from its crimp, then it is not likely to. If any of the rounds shifted at all, you need to go back to the drawing board reloading press.

As I mentioned previously, rounds for semi-automatic pistols do not need their bullets to be set in their cases with a pair of vice grips, but they do need to cycle through your handgun.  Head to the range and try cycling a sampling through your firearm before giving these rounds the greenlight.

Crimping is one of the easiest things to mess up when reloading your own ammunition and, as luck would have it, it’s the very last step before range time. Because it manages case pressure, a bad crimp can really hurt accuracy so focus and put in a bit of time and effort on this last step to ensure your bullets get placed where they belong in their cases (and on target).